North Koreans escape to the South

Four North Koreans who ended up in a Japanese port two weeks ago after attempting to flee their homeland by boat have reached South Korea, their desired destination. 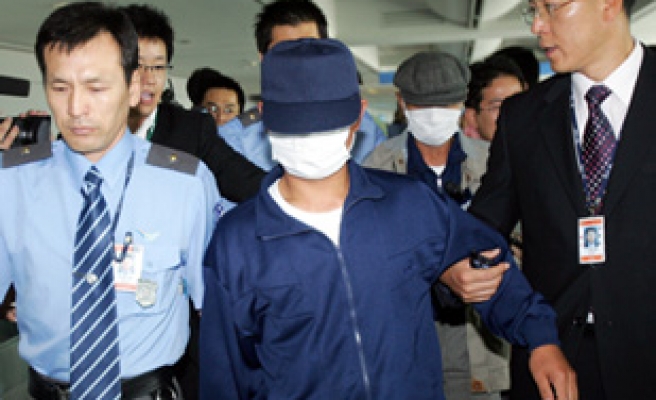 The three men and one woman who had been taken into custody in northern Japan on June 2 landed at South Korea's Incheon International Airport on Saturday.


Footage from South Korea's YTN news channel showed the North Koreans, with their faces hidden by masks and caps, walking through the airport escorted by security staff.

The four defectors are believed to be a couple and their two adult sons.

When the four were asked by reporters how they felt about being in South Korea, the man said: "It's good".


Earlier, the Japanese foreign ministry said in a statement that the family had fled to reach South Korea.


"We made arrangements with South Korea for their departure from a humanitarian standpoint and based on their wishes," it said.

The North Koreans had reached Japan in a small wooden boat after a sea journey they said began on May 27.

They said they wanted to go to South Korea and Japanese officials had said they would be treated sympathetically.


The four told police they left Chongjin on the east coast of North Korea and headed south.


They then changed course due to heavy security and ended up at Fukaura in Japan's northern Aomori region, 800km to the east of the country.

They were quoted in the media as saying that they were lucky to be able to eat bread every other day.

However, media reports said they were wearing wristwatches - raising questions about how poor they actually were.

Some North Korea spectators said the watches implied a middle class status and their departure hinted at growing frustration among that class - since the poor could not leave and the elite would not need to.

Japan can grant asylum seekers a six-month permit under its immigration law, and a 2006 "North Korean human rights law" also states the government must take measures to protect and support defectors from North Korea.

In the past, North Korean defectors have fled to Japanese missions and other premises in China.

Tokyo has allowed them to leave for third countries, but it is rare for North Koreans to flee to Japan.

Their arrival had raised concerns relations between Tokyo and Pyongyang - which have no diplomatic ties - could worsen if North Korea demanded their return, but no such demands have been made.

Japan is in dispute with North Korea over the fate of Japanese citizens kidnapped decades ago by Pyongyang's agents to help train spies.

Abe has said that without a resolution to the abduction issue, Japan will not provide funds for a multilateral deal reached in February under which North Korea agreed to scrap its nuclear arms programme in return for energy aid.