NYT: A Rumble Is Heard in Ataturk's Grave

It is a group of politicians who value Islam who are hoisting Turkey up toward the club, which Ataturk's secular contemporaries never were able to do. 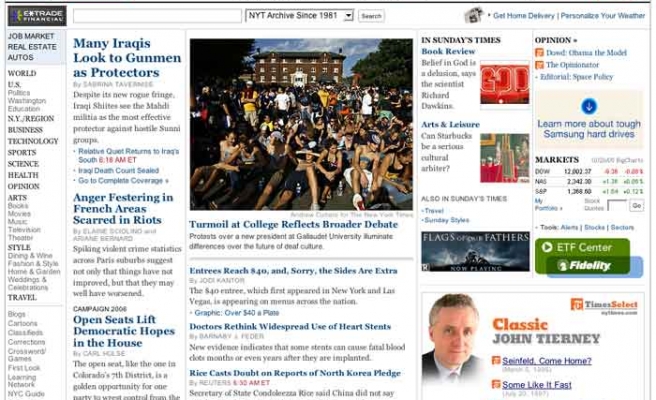 By NYT's Sabrina Tavernise news a group of politicians with the Islamic values are making Ataturk's dream come true in Turkey on the way to European Union and modern life.

Sabrina Tavernise says these in her news on NYT with the title "A Rumble Is Heard in Ataturk’s Grave":

SURVEYING the wreckage of the Ottoman Empire in the 1920’s, Mustafa Kemal Ataturk saw an impoverished peasant society that was 90 percent illiterate, whose primary exports were tobacco and dried fruit.

An autocrat, a drinker and a brilliant nation builder, Ataturk set about assembling a state meant to wrench his countrymen out of their backwardness.

Today, Turkey is poised to join Europe — if the continent will have it — in what would be the fulfillment of Ataturk’s vision. But in an irony of history, it is a group of politicians who value Islam who are hoisting Turkey up toward the club, which Ataturk’s secular contemporaries never were able to do. So a look to Turkey’s past is useful to understand its complicated present.

The model for a new Turkish state, Ataturk believed, was to be found in the nations of Europe and the West, where modern thought and reason had made the societies rich. Religion, he concluded, was a major hindrance to becoming modern.

“My people are going to learn the principles of democracy, the dictates of truth and the teachings of science,” a well-known quotation of his goes. “Superstition must go. Let them worship as they will; every man can follow his own conscience provided it does not interfere with sane reason or bid him act against the liberty of his fellow men.”

Andrew Mango, author of “Ataturk: The Biography of the Founder of Modern Turkey,” said that Ataturk “accepted religion as a social fact, but he had no time for it.”

So Ataturk instituted radical secular reforms. Changing the alphabet, replacing Shariah with the Swiss civil code, criminalizing the wearing of the fez and traditional dress, and discouraging the veil were intended to protect the state from religion, not just separate the two. And the approach was not unusual in Ataturk’s day.

Revolutionaries in Mexico and Russia also linked the concepts of modernization and anticlericalism. A few years later, in Iran, Reza Shah would copy Ataturk’s approach wholesale.

Over the next eight decades, the system Ataturk built settled deeply into Turkish society. It brought Turkey up to levels of economic and social development on par with Europe. The secular establishment produced wealthy families who established generously endowed private universities and museums. Turkey became largely literate and acquired a growing middle class.

But politically it remained frozen in time. While Europe redefined its ideas of modernity in ways that emphasized democracy, tolerance and human rights, Turkey’s leaders continued down a path of rigid, corrupt and sometimes harshly repressive rule. The military remained the central guardian of Ataturk’s legacy, ousting four elected governments in the last four decades of the 20th century. A period of economic openness in the 1980s was the one sustained break in the pattern of state control.

So the political group who claim to defend Ataturk’s legacy became the ones offering the least in the way of new ideas. “They defend secularism in a religious, dogmatic way,” said Akif Emre, a columnist for Yeni Safak, a conservative newspaper here.

A turning point came in 2002, when voters rebelled against a spectacular display of corruption and incompetence by the secular parties and elected instead the party of Recep Tayyip Erdogan — a former mayor of Istanbul whose party, despite its Islamic roots, had proved adaptable to the rules of democracy while holding municipal power.

In the last four years, as the dominant power in the national Parliament, it has drawn more Turks into the political process and adopted as its major goal membership in the European Union. It has passed more than 800 laws to make Turkish laws and standards match those in Europe. It has scrapped the death penalty. It has removed military representatives from several layers of Turkey’s civilian government.

Its domestic audience remains fearful of where any party with Islamist roots might one day lead Turkey; thousands of Turks have rallied in at least three major cities in the past month to express those concerns. “If Ataturk came back today, he would say ‘I’m afraid I need to erase this and start all over again,’ ” said Guldal Okutucu, the head of the women’s branch of the main secular opposition party. “He would have told his nation to wake up.”

But a number of foreign experts and officials have concluded that Turkey’s new leaders seem committed to the kind of dynamic, pluralist society that Europeans might welcome into their club.
“They opened up a system that had to be opened up to get into the E.U.,” said Joost Lagendijk, a member of the European Parliament who heads a committee on Turkish issues. If the parties of the secular elites “had remained in the government it would have been impossible to start E.U. negotiations,” he said.

Israel, which developed a military partnership with Turkey in the 1990s and might have been expected to be suspicious of the new government, has instead expressed enthusiasm. “We are at the highest moment in relations with Turkey ever,” said Pinhas Avivi, Israel’s ambassador to Turkey. “No prophet could have seen it in advance.” Trade with Israel is now $2.5 billion, double what it was before Mr. Erdogan came to power, he said.

But some important Europeans remain skeptical. Nicolas Sarkozy, France’s new president, put opposition to Turkey’s membership in the European Union into his campaign platform, arguing that the country is neither culturally nor geographically part of Europe — a stance that Mr. Erdogan took issue with last week. “Mr. Sarkozy has to overcome these prejudices,” he said. “If we are going to integrate civilizations inside the European Union, and say that the European Union is not a Christian club, Sarkozy has to look at his thoughts once more.”

What would Ataturk think?

Mr. Mango said that the nation builder had no feeling of inferiority when dealing with Europeans. If he were to encounter Mr. Sarkozy today, he said, “he wouldn’t have felt that this just shows how civilized people hate us; it would just mean that Sarkozy is not a very civilized man.”