Obama can not change US bias, Muslims think

Barack Obama has disappointed once again Muslims and Arabs he will put Israel's interests first if he becomes U.S. president, after a Middle East tour that ended on Thursday. 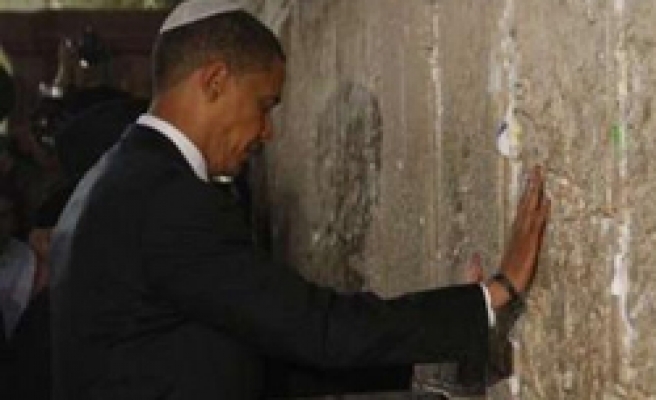 Barack Obama has disappointed once again Muslims and Arabs he will put Israel's interests first if he becomes U.S. president, after a Middle East tour that ended on Thursday.

When it comes to the Israeli-Palestinian conflict, many in the region believe, Obama would display the same bias in favour of the Jewish state that they now expect from any White House occupant -- even one with a Muslim name and African roots.

"There will be minor changes if Obama is elected, but he will never side with the Palestinians against the Israelis. He knows he can't afford that," said Lana Bazzi, 20, a student in Beirut, citing the power of the Jewish lobby in America.

The Democratic senator flew to Germany after visits to Afghanistan, Kuwait, Iraq, Jordan, Israel and the West Bank.

Obama told Israelis their nation was a "miracle" and vowed never to seek peace concessions that would harm it.

Israelis may have qualms at losing George W. Bush, whom they see as the most pro-Israel U.S. president ever, but some queried Obama's enthusiasm to prove his loyalty to the Jewish state.

An editorial in the left-leaning Haaretz newspaper said Israel and the region needed diplomatic innovation.

"But it seems that Obama -- like his opponent John McCain and Bush before him -- is attempting to win the trust of potential Jewish voters at the expense of promoting the peace processes in the region," Haaretz said.

"Jerusalem will be (Israel's capital) over our dead bodies," said Khalil Abu-Sarhan, a Palestinian living in Dubai. "He speaks as if it belonged to him or the Israelis. It belongs to my ancestors who built it with their sweat and blood."

Obama later said he had used "poor phrasing" and that Jerusalem's fate must be negotiated.

Palestinian leaders, who met Obama in Ramallah on Wednesday, accepted what he told them regarding Jerusalem, Palestinian negotiator Saeb Erekat said. "He told us final-status issues would be discussed and resolved by the two parties."

From Gaza to the Gulf, even Arabs generally favourable to the United States are againts its pro-Israel policy. The most many hope for from an Obama presidency is a change of style.

"I hope Obama will bring back some of the U.S. credibility lost by Bush's ideological crusade against Arabs and Muslims," said Ibrahim Salameh, a Jordanian businessman.

Emad Gad, an analyst at Cairo's al-Ahram Centre for Political and Strategic Studies, said Arabs still felt Obama might be more sensitive to Arabs and Muslims than his Republican opponent. "He will not speak about a clash of civilisations or the negative aspects of Islam. He will concentrate on dialogue."

In Kuwait, Ali al-Baghli, a political analyst and former oil minister, said Obama was "over-zealous" to be seen as a friend of Israel. "But we hope that as a black man Obama will understand the suffering of poor people and the Palestinians."

Amr Sawah, a municipal worker in Damascus voiced cynical pessimism, saying Obama had no vision for the region. "He could even adopt more racist policies against Arabs and Palestinians to prove he is no different from a white president."

Obama has pledged to get involved in Israeli-Palestinian peacemaking early on, if elected. He has also said he favoured engaging with Syria and Iran, viewed as enemies in Washington.

In Iran there is some fascination with Obama's middle name Hussein, that of a Shi'ite hero martyred in the 7th century, but more interest in his willingness to negotiate -- although Obama said on Wednesday a nuclear Iran would pose a grave threat.

"It may be better for Iranians if Obama is elected," said Iranian analyst Abdolreza Tajik, citing the Democrat's softer tone. "But America's general policies do not change with the change of a president. It is only the method that changes."

Another Iranian analyst, who asked not to be named, said Obama's comments in Israel had eroded Iranian perceptions that he would make a better president than his rival McCain.

He said such perceptions might alter even more in the run-up to the November election "because it is possible that Obama might have to take more radical and anti-Islamic positions in order to prove he is not very close to pro-Muslim sentiment".