Obama: 'Mccain can leave troops in Iraq for decades'

Democrat Barack Obama took aim on Monday at potential White House opponent John McCain on Iraq, saying the Republican senator could not offer a clear definition of success in the conflict and might leave ,U.S. combat troops there for decades. 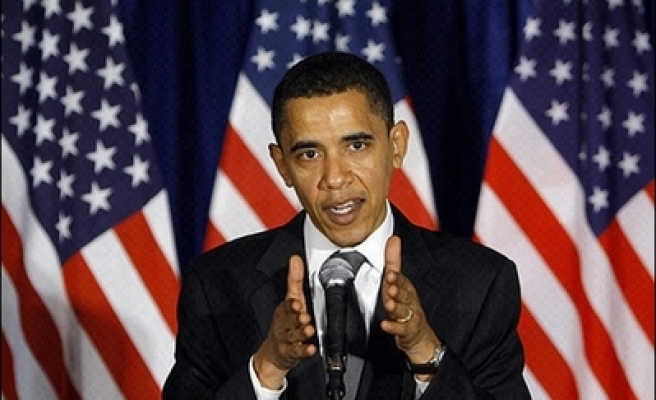 Democrat Barack Obama took aim on Monday at potential White House opponent John McCain on Iraq, saying the Republican senator could not offer a clear definition of success in the conflict and might leave ,U.S. combat troops there for decades.

Obama looked past Democratic rival Hillary Clinton before their showdown in Pennsylvania on April 22 and trained his fire on McCain, who has clinched the Republican nomination and will face the Democratic winner in November's election.

Obama accused McCain of "clinging to the policies of the past." He said the Arizona senator shared a vision of Iraq with President George W. Bush and had not spelled out how the United States would be able to end its military involvement there.

"The problem that we've had, both with John McCain and George Bush, is there's no clear definition of success. There never was. And that's why this has been such a profound strategic error," Obama, an Illinois senator, told reporters while campaigning in Pennsylvania.

"For him to argue that -- which he has repeatedly -- that any suggestion that we withdraw troops is surrender, that implies that, you know, we will be there as long as he thinks it's necessary for us to be there," he said.

Obama and Clinton were both on the campaign trail in Pennsylvania, site of the next contest in their hard-fought battle. Both accused McCain of lacking a clear plan to end turmoil in America's housing market.

"Senator McCain recently gave a speech on the economy, and best I could determine his plan was not to have a plan," Clinton, a New York senator, said during an economic round-table in Harrisburg.

Clinton, who trails Obama in pledged delegates won in state-by-state contests, has rejected calls to step aside in the Democratic race.

Neither candidate is likely to have the 2,024 delegates needed to win the nomination after the contests end in early June, leaving the decision up to nearly 800 superdelegates -- elected officials and party insiders who are free to back any candidate.

Obama gets another endorsement

Obama picked up the support of another superdelegate, Minnesota Sen. Amy Klobuchar, who said Clinton had the right to continue campaigning and she believed the party would eventually rally around the winner.

McCain, a military veteran and former prisoner of war in Vietnam, kicked off a weeklong tour in Mississippi highlighting his service and introducing his life story to U.S. voters.

Obama said McCain deserved praise for having "sacrificed on behalf of his country." But he said McCain's stance on Iraq and his support for preserving the Bush tax cuts for the wealthy showed he would continue those policies.

"He is clinging to the policies of the past and we are already in the future," Obama told a rally in Allentown.

McCain has criticized Obama and Clinton for proposing a quick U.S. troop withdrawal from Iraq, saying that would embolden America's enemies and spread greater chaos in the Middle East.

Obama defended his frequent criticism of McCain for saying at a campaign event in January he would be willing to leave American troops in Iraq for 100 years.

"We've been in South Korea for 50 years. And he's used that as an example, as George Bush has, and that is decades," said Obama. "That's something that the United States can't afford, and I think that's going to be a debate that we're going to have in the general election, should I be the nominee."

McCain's campaign said it was pleased Obama had at least acknowledged Republican senator was referring to a South Korea-like peacetime military presence in Iraq.

"With Barack Obama finally acknowledging today John McCain does not support a 100-year war in Iraq, we expect that he will answer his own calls for a more honest debate and stop playing crude politics with such an important issue," said McCain spokesman Tucker Bounds.