Barack Obama erased Hillary Rodham Clinton's once-imposing lead among superdelegates Saturday when he added more endorsements from the group of Democrats who will decide the party's nomination for president. 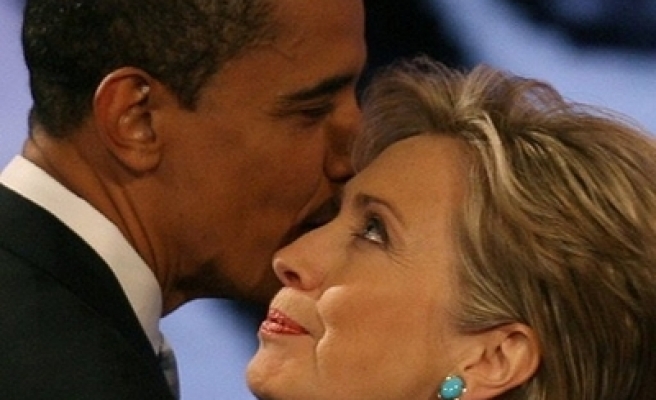 Obama added superdelegates from Utah, Ohio and Arizona, as well as two from the Virgin Islands who had previously backed Clinton. The additions enabled Obama to surpass Clinton's total for the first time in the campaign. He had picked up nine endorsements Friday.

The milestone is important because Clinton would need to win over the superdelegates by a wide margin to claim the nomination. They are a group that Clinton owned before the first caucus, when she was able to cash in on the popularity of the Clinton brand among the party faithful.

Those party insiders, however, have been steadily streaming to Obama since he started posting wins in early voting states.

"I always felt that if anybody establishes himself as the clear leader, the superdelegates would fall in line," said Don Fowler, a former chairman of the Democratic National Committee.

"It is perceived that he is the leader," said Fowler, a superdelegate from South Carolina who supports Clinton. "The trickle is going to become an avalanche."

Superdelegates are the party and elected officials who will automatically attend the Democratic national convention this August in Denver. They can support whomever they choose, regardless of what happens in the primaries.

They are key because neither Obama nor Clinton can win the nomination without them.

Nearly 800 superdelegates will attend the convention. Obama has endorsements from 276, according to the latest tally by The Associated Press. Clinton has 271.5.

Many of the superdelegates who endorsed Obama in the past week said it is time for the party to unite behind him. Obama is coming off a big win in North Carolina's Democratic primary Tuesday. Clinton narrowly won Indiana's primary the same day, but Obama did better than many expected.

Obama has added 21 superdelegates since and Clinton has had a net increase of two.

Kevin Rodriquez of the Virgin Islands said in a statement that he switched from Clinton to Obama because he thinks Obama has brought energy and excitement to the party.

"He has shown he can connect with Democrats, Republicans and independents across this country, whether we live on the mainland or an island," Rodriquez said.

In all, Obama added five superdelegates late Friday and Saturday. Clinton added one in Massachusetts, but lost the two in the Virgin Islands.

Clinton started the year with a 106-delegate lead among superdelegates, a margin that started to shrink after Obama won the Iowa caucuses in early January.

Jenny Backus, a Democratic consultant who is not aligned with either candidate, said the Democratic National Committee was filled with superdelegates who had long supported Clinton and her husband, the former president. That gave Clinton a built-in advantage.

"The DNC was her turf, and she was the candidate of the insiders," Backus said.

Clinton's margin slipped to 87 the week of Super Tuesday, just as Obama was about to embark on a stretch of 11 straight victories in primaries and caucuses.

Obama was rewarded for his success at the polls.

From Super Tuesday on Feb. 5 to the March 4 primaries in Ohio and Texas, Obama picked up 51 superdelegates while Clinton had a net loss of one.

"Normally the party activists march lockstep with the establishment candidate," Backus said. "They didn't do that this time."

Even during Obama's toughest stretch of the campaign, when his former pastor's incendiary comments dominated the headlines, Obama kept churning out superdelegate endorsements. And when Clinton posted a big win in the Pennsylvania primary, Obama collected still more.

Clinton picked up the pace of her endorsements after Pennsylvania, adding 11.5 superdelegates in the following two weeks, including the half delegate from the Democrats Abroad. Obama countered by adding 22.

A little more than 200 superdelegates remain undecided, and about 40 others will be named by state parties at state conventions and meetings throughout the spring.

Obama has a 163-delegate lead among the pledged delegates won in primaries and caucuses. That means Clinton would have to generate an identical lead among superdelegates to catch him.

In the overall race for the nomination, Obama has 1,864.5 delegates and Clinton has 1,697, according to the latest AP tally. Obama is just 160.5 delegates shy of the 2,025 needed to secure the Democratic nomination.

Ohio labor leader Dave Regan, who was selected as a superdelegate Saturday, told the AP that Obama is "the candidate that can unite the country and move beyond the divisiveness and gridlock that we have today."

"But that was two months ago. I think as the campaign has unfolded, Obama is looking like a stronger and stronger candidate," Regan said. "I think it's very likely he will be the nominee."