Some female superdelegates backing Sen. Barack Obama are having their "sisterhood" questioned, just as some black Democrats have been challenged for their endorsement of Sen. Hillary Rodham Clinton. 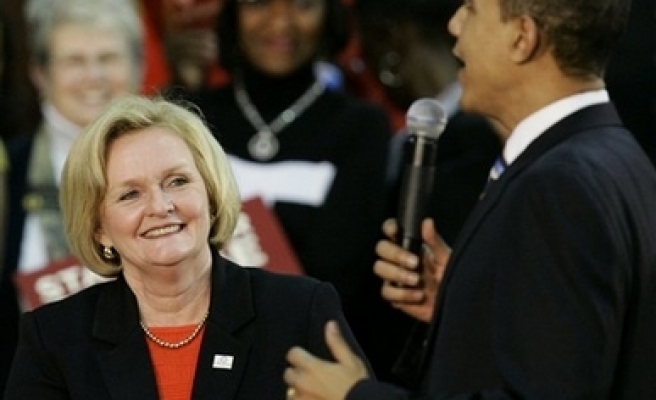 No one has actually accused Sen. Amy Klobuchar, D-Minn., of betraying her gender in supporting Obama over Clinton in the race for the party's nomination, but they've let her know they're disappointed.

The reason some give: If Clinton does not win the White House this year, no woman will reach that goal in their lifetimes.

Klobuchar gets it; her mother, 80, is one of these women. The senator's 12-year-old daughter, meanwhile, supports Obama.

Mother's Day, when the three will next spend time together, could be a bit uncomfortable.

"Early on, I had a few people call and say, 'Please don't do this. We don't think it is a good idea for you.' They tended to be donors," Klobuchar recalled. "No one actually yelled at me to my face."

Superdelegates are members of Congress, elected officials and other party leaders who can back any candidate regardless of the vote in their state or district.

For those voters who feel betrayed by their superdelegates, the question isn't so much why they endorsed one Democratic candidate, it's why they rejected the other. Sometimes, the query is coupled with a veiled threat: Don't take your own success for granted.

"There's no question that some of our members are very angry," said Ellen R. Malcolm, president and founder of the EMILY's List political action committee, which gives money to female candidates who favor abortion rights.

Asked whether Klobuchar and fellow freshman Sen. Claire McCaskill of Missouri, another Obama superdelegate, risk losing their seats over these endorsements, Malcolm said, "We'll just have to wait and see."

The issue is so sensitive some superdelegates are remaining neutral until a clear winner emerges. Rep. Carolyn Kilpatrick of Michigan, who is black and a woman, remains uncommitted.

Kilpatrick's staff late Thursday referred to a statement the congresswoman made in February in which she said she was remaining neutral because she's the chairwoman of the Congressional Black Caucus and did not want to take sides.

Sen. Barbara Boxer of California is avowedly neutral but intimately aware of the conflict. "My family is divided," she said.

Exacerbating the situation is the reality that a woman or a black man is poised to capture the party's nomination to an office that's been the province of white men for two centuries. Each candidate represents major constituencies in the party. In the absence of major differences in their policy positions, race and gender loyalty becomes a factor.

Among black superdelegates, Rep. Jesse Jackson Jr., asked Rep. Emanuel Cleaver of Missouri, a Clinton supporter, earlier this year: "If it comes down to the last day and you're the only superdelegate ... do you want to go down in history as the one to prevent a black from winning the White House?"

A veteran of the 1960s civil rights struggles, Rep. John Lewis of Georgia, switched from Clinton to Obama in mid-race.

Older women particularly feel that Clinton is their only hope of seeing a woman occupy the Oval Office, McCaskill said. One refused to talk with her during a Democratic fundraiser in early April, she said.

And some feel simply that it's Clinton's turn, something she's owed.

"I don't know, really, where that comes from, the 'her turn' stuff," McCaskill, a former prosecutor and state auditor, said in a recent interview. "I just don't think we can ever get into the trap of deciding elections based on who's 'turn' it is.

"Nobody ever considered it my turn," she added. "I had to go out and fight for it."

Former lawmaker Pat Schroeder said the media's focus on Clinton's difficulties — from the pitch of her laugh to Bill Clinton's affect on her candidacy — "have become kind of female legend."

"There's a feeling, you know, of sisterhood," explains Schroeder, a Clinton supporter who flirted with a presidential bid in 1988.

"There's really a general consensus that (Clinton's) gotten the short end of the stick when it came to media, and you have women knowing all along that women have had a tough go in politics," Schroeder added.

The group has helped the Obama supporters, too. But Clinton by far is the brightest name on its marquee.

"It is sort of a man bites dog story when the women senators or congresswomen support Senator Obama," said Malcolm.

Klobuchar tried to explain. Starting on Feb. 5 when her state chose Obama over Clinton 2-to-1, she made perhaps dozens of telephone calls to supporters and Clinton herself, "so no one would be surprised."

"There was no doubt where I was going after that," Klobuchar recalls. Clinton, she said, "understood, given what happened in my state."

McCaskill says she is more than willing to explain her personal connection to Obama and her belief that he would make the better president — as well as her willingness to support Clinton, should she instead win the nomination.

But as McCaskill can attest, not everyone wants to hear her side. Recalling the woman who avoided her: "She was very upset with me and didn't want to talk to me. And that was hard. I just hope that time will help heal that."