OIC says Israelis should be tried for 'war crimes'

The head of OIC has called for Israelis to be tried by an international war crimes court for "heinous" attacks against Palestinians. 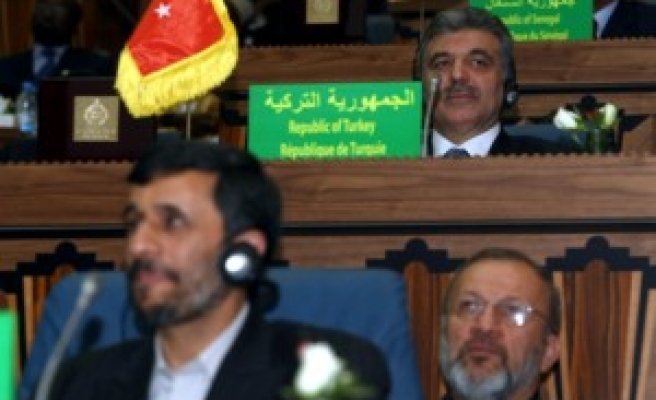 The head of the world's biggest Muslim body, the Organization of the Islamic Conference (OIC), has called for Israelis to be tried by an international war crimes court for "heinous" attacks against Palestinians.

Ekmeleddin İhsanoğlu, the Turkish secretary-general of the 57-nation body, late on Thursday told an OIC summit in Senegal that Israel was repeatedly seeking to undermine foreign-brokered peace plans.

"The situation in Palestine remains deplorable due to the successive crises fabricated by Israel to stall the peace process and to thwart the many peace plans and initiatives proposed by the international community," he said.

"It has become indispensable that these aggressions and heinous crimes be officially documented and their perpetrators be brought before the international justice designed for these kinds of acts, such as the International Criminal Court," he added.

UN Secretary-General Ban Ki-moon told the summit that Israel's "disproportionate and excessive use of force" had killed and injured many civilians including children and called for the violence to stop. "I condemn these actions and call on Israel to cease such acts. Israel must fully comply with international humanitarian law and exercise utmost restraint," Ban told the summit.

Palestinian President Mahmoud Abbas had earlier accused Israel of "ethnic cleansing" in Jerusalem by banning the building of Palestinian homes and cutting the city off from the rest of the occupied West Bank. "Our people in the city are facing an ethnic cleansing campaign through a set of Israeli decisions such as imposing heavy taxes, banning construction and closing Palestinian institutions in addition to separating the city from the West Bank by the racist separation wall," Abbas told the OIC summit.

President Abdullah Gül, delivering a speech at the summit, also touched upon the Israeli-Palestinian dispute, as he described the US-sponsored peace talks launched last November at Annapolis, Maryland, as "the last opportunity" for maintaining peace in the Middle East. The tragedy in Palestine is continuing, Gül said, and stressed that at this point, unity among Palestinian people must be promoted.

"It should not be forgotten that stalemates or unfair resolutions may harm all of us and hinder peace in the region and the world. All of these issues are also leading to the waste of natural, economic and humanitarian resources of Islam societies," Gül told the summit.

"Producing regional or national resolutions for ending this deadlock is a common duty for all of us. The Alliance of Civilizations initiative launched by Turkey and Spain under the auspices of the UN secretary-general is an example for global efforts," Gül added.

The spirit and understanding in these kinds of efforts should be turned into regional mechanisms which will bring permanent and just resolutions to disputes and problems in the Islamic geography; this will build confidence and will encourage cooperation and solidarity, he said.

In Dakar, the leaders of the world's Muslim states also criticized a rising wave of Islamophobia in the West and pledged to combat Islamic extremism, which they said was partly to blame.

"Ignorance about Islam and calculated animosity with deep historic roots on the part of a minority in the West as well as our failure to defend the true values of Islam are the reasons for the increasing wave of Islamophobia," İhsanoğlu told the summit.

Caricatures of the Prophet Mohammed printed by European newspapers sparked anger across the Muslim world. Some Western human rights groups have accused the OIC of trying to limit freedom of expression and belief.

"Should freedom of expression mean freedom to blaspheme? There is no such thing as limitless freedom," Senegalese President Abdoulaye Wade told delegates, while criticizing those who carried out attacks in the name of Islam, saying, "They deserve only our contempt."