The campaign to oust Prime Minister Ehud Olmert shifted to the streets Thursday, with a mass rally in Tel Aviv expected to draw tens of thousands of opponents calling for the embattled Israeli leader to step down. 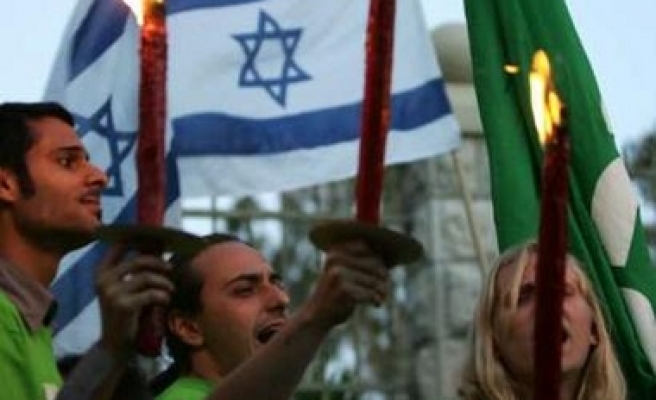 The campaign to oust Prime Minister Ehud Olmert shifted to the streets Thursday, with a mass rally in Tel Aviv expected to draw tens of thousands of opponents calling for the embattled Israeli leader to step down.

Olmert, under fire for his handling of last summer's war against Lebanese, appeared to be quashing an incipient rebellion against him in the ranks of his Kadima Party — at least for now.

On Wednesday, Foreign Minister Tzipi Livni, a party heavyweight, called on him to quit, and another top party figure, parliamentary coalition chief Avigdor Yitzhaki, resigned to protest Olmert's refusal to step down.

Olmert himself said he intended to stay on to remedy the severe flaws in decision-making and crisis management that a government war probe identified in a scathing report released Monday. Olmert was singled out in the report for exceptional censure.

At an emergency Kadima meeting called after Livni's announcement Wednesday, Olmert said he would implement the war report's recommendations "down to the last detail."

"I'm personally in an uncomfortable position, but I'm over 60, and have had a lot of experience," spokesman Jacob Galanti quoted him as saying. "I've learned to take responsibility for my actions."

Israel's parliament was to interrupt its spring recess Thursday to hold a special session to discuss the war probe.

In defecting from Olmert's camp, Livni told the prime minister he had lost the public's support, and said she considered herself the rightful successor to lead Kadima.

"I told him that resignation would be the right thing for him to do," Livni told reporters. "I haven't worked and am not working to topple the prime minister. That's a decision he'll have to make."

Livni is a relative political newcomer and a former officer in the Mossad spy agency.

Under Israel's parliamentary system, Kadima could switch its leader without losing power. The Israeli prime minister is not directly elected and usually comes from parliament's largest bloc.

But Vice Premier Shimon Peres, emerging from the Kadima meeting late Wednesday, said the party backed Olmert in his decision not to resign.

Reuven Hazan, a political scientist at the Hebrew University of Jerusalem, said Livni's challenge would have been worse had she threatened to resign or bring down the government.

Hazan said the turnout by Olmert's opponents at the rally in Tel Aviv on Thursday could determine whether the momentum against Olmert grows or fizzles out.

Lawmakers Effie Eitam, a hawk, and Yossi Beilin, a dove, set aside their deep political differences to team up in a joint newspaper column on Thursday, demanding a shakeup at the top. They predicted hundreds of thousands of Israelis would show up in Tel Aviv to call for a new leader.

"Both of us are convinced Olmert has to go home because of his great failure during the second Lebanon war," they wrote in the column that appeared in the Maariv daily.

Alon Davidi and 34 other protesters started marching to Tel Aviv two days ago from the southern town of Sderot, 45 miles away.