Police rushed to detain two Britons and two Americans who unfurled "Free Tibet" banners from poles near the main "Bird's Nest" stadium, and stopped other public protests during the day. 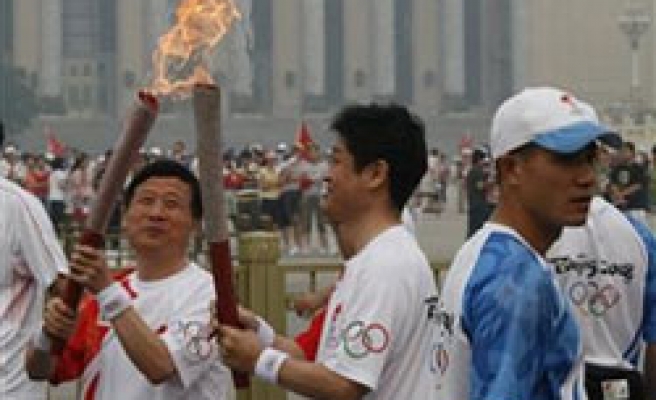 Euphoric Chinese crowds chanting "Go Olympics, Go Beijing" cheered the Olympic flame through the capital on Wednesday at the end of its troubled global relay, but critics refused to be silenced.

"America stands in firm opposition to China's detention of political dissidents, human rights advocates and religious activists," Bush will say in a speech in Bangkok on Thursday, excerpts of which were released in advance.

A handful of foreign protesters took their chance to grab the spotlight before attention shifts on to the sporting contests.

Police rushed to detain two Britons and two Americans who unfurled "Free Tibet" banners from poles near the main "Bird's Nest" stadium, and stopped other public protests during the day.

The mood in Beijing, though, was one of mounting excitement, with most of the 10,500 athletes from 205 countries now in town.

The first competition, women's soccer, began with three matches. World champions Germany drew 0-0 with Brazil in front of a sparse crowd in Shenyang.

Men's soccer, which has drawn Brazil's Ronaldinho, starts on Thursday. Argentina's Lionel Messi could be on his way home after his Spanish club Barcelona won the right not to release him.

At the weekend, the eagerly awaited swimming competition begins in the new "Water Cube" pool, another shimmering landmark for the Olympics. American Michael Phelps is seeking to smash compatriot Mark Spitz's 1972 record of seven golds in one Games.

Phelps tried to puncture some of the hype on Wednesday, "You guys are the ones talking about it...I'm not," he told media.

In Tiananmen Square, Beijing's symbolic heart best-known abroad for the crushing of 1989 protests, one of China's most famous sportsmen, 7ft 6in basketball player Yao Ming, said he was overwhelmed as he held the flame above a sea of beaming faces.

"After lighting it, my mind went blank, and then I just wanted to hurry up running ahead," said Yao, according to official news agency Xinhua.

Though not fully fit, NBA player Yao will lead China's team when basketball starts at the weekend, also featuring a U.S. squad pumped to avenge missing gold in Athens four years ago.

Children wore "I Love China" T-shirts and workers waved flags and pom-poms, while drums and cymbals resounded around Tiananmen under a portrait of late revolutionary leader Mao Zedong.

So police were quick to react to Wednesday's Tibet protest, taking 12 minutes to remove the four, according to state media.

The Dalai Lama, exiled spiritual leader of the Tibetan people, who has repeatedly distanced himself from protests against the Games, sent his best wishes to China.

"This is a moment of great pride to the 1.3 billion Chinese people," he said from his home in northern India. "I send my prayers and good wishes for the success of this event."