Omkara begins with a credit that reads, "Vishal Bhardwaj's adaptation of Shakespeare's Othello." 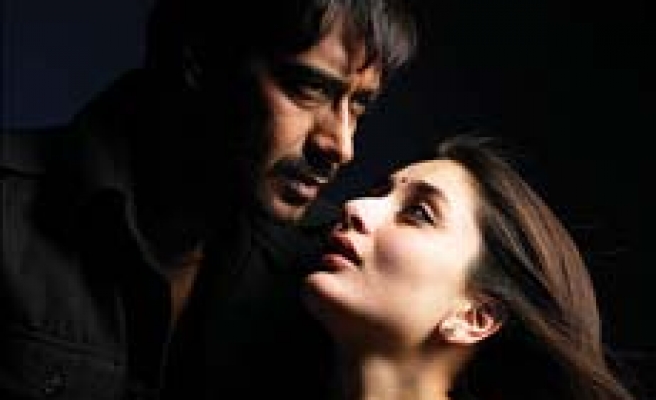 The characters in Bhardwaj's movie share the same first letters as their counterparts in the Shakespearean play - Omkara (Othello), Ishwar (Iago), Dolly (Desdemona), Indu (Emilia), Kesu (Cassio), Billo (Bianca), and so on. The year 2007 marks the 385th anniversary of the first publication of Othello. For those not familiar with the Bard's Venetian domestic tragedy, Othello, the movie Omkara can be said to be on the global theme of suspicion kills. Some might think the director had liberally borrowed themes from Hindu epics - such as Ramayana (suspicion of the wife and listening to false counsel) and Mahabharata (power and the politics of power) - rather than Othello. I think those who have not read Othello are bound to enjoy the movie more, as the ending will be a surprise to them.

Set in the rural areas of the North Indian state of Uttar Pradesh, the story of Omkara goes something like this - Omkara or Omi (Ajay Devgan) is a political goon in love with Dolly (Kareena Kapoor), a lawyer's daughter. As her father had arranged for her to marry Rajoh (Deepak Dobriyal), Dolly elopes with her love, Omkara.

Omkara has two trusted right-hand men namely Ishwar "Langda" Tyagi (Saif Ali Khan) and Kesu (Vivek Oberoi). Nicknamed "Langda" or "Lame", Ishwar is a sharpshooter - smart, ruthless and power-hungry. He is married to Indu (Konkana Sen), who is the big sister to all the goons of Omkara's gang, including Omkara. Kesu is an educated, loyal goon whose mistress is a local dancer named Billo (Bipasha Basu).

When it comes to naming his chief lieutenant, Omkara chooses Kesu over Langda to attract Kesu's large political base and thereby ensure an electoral win for Bhai Sahib. When the astute Bhai Sahib asks, "What about Langda?" Omkara naively replies, "He is like my brother. He will understand." Omkara trusts and values Langda implicitly but never bothers to explain his reasons to him. This single incident sets off Langda to bring down Omkara and Kesu by sowing suspicions in Omkara of Dolly and Kesu having an affair.

Langda teams up with Rajoh, who is vengeful over Dolly's refusal to marry him, and they slowly create circumstantial evidence that makes Omkara begin to suspect Dolly of adultery.

Bhardwaj's adaptation of the play must be commended for several reasons:

First, the cinematography by Tassduq Hussain is fantastic. In a way, he is the star of the movie as he is able to make even the most simple and bare locations look enticingly beautiful. In addition, the way he uses light and darkness in each frame to convey the characters' emotions and that of the situation is fabulous. Some scenes capture effortlessly the details of the Indian region of Uttar Pradesh, like when Langda paints his small finger with pink nail polish (a common practice among male villagers), the marriage sequence, and the murder of political opponents and police officers.

Second, the dialogues penned by the director Vishal Bhardwaj are both interesting and funny. They are not your regular run-of-the-mill Hindi film dialogues and in many places, the language is vulgar but realistic. A few dialogues stand out, like the unusual one by Dolly's father, "If a daughter is disloyal to her own father, you think she will be loyal to you?" This sort of degradation of one's own children is rarely seen in Indian movies. It also sows the first seed of suspicion in Omkara.

The dialogue that I will always remember is when Langda, realizing Omkara knows everything, defiantly tells him, "You heard what you wanted to hear. Not truth or lies but what you wanted to believe." The humorous and witty lines are reserved for Langda, so much so that you like him better than Omkara. Indu speaks little, but is extremely endearing when she does.

Third, the performances of some of the cast are commendable. Saif Ali Khan as Ishwar "Langda" Tyagi cannot be praised enough. Khan, who otherwise appears in characteristic chocolate-boy looks, fashionable clothes, and the image of a leading man, gives in Omkara a controlled, brilliant performance as a power-hungry, uneducated, rustic goon with a wonderful sense of humor. Despite his unkempt looks, jarring language, and limp, Langda is made a lovable villain by Khan's performance. Khan acts marvellously even when he is not delivering dialogues.

Khan makes Langda dignified, so that the audience sympathizes with him when he does not get the lieutenant post. Khan provides a clear emotional background to his character. When Rajoh makes him wear sunglasses and dances around him screaming "Langda, Bahubali" (Langda, Chief-Lieutenant!), Langda's face broadens into a smile, conveying expectation. Following this, Omkara passes up on Langda and the flushed, disappointed face put on by Khan quietly conveys the hurt and the disbelief of his character. Finally, adding insult to injury, Langda is asked to announce to those waiting outside that Kesu has been appointed chief-lieutenant. He does it with a quiet majesty and never shouts, cries, or questions. Later, he smashes his own reflection in the mirror and uses his own blood to put a mark on his forehead (a tilak), crowning himself lieutenant. Khan makes Langda a force to reckon with, which is unusual for a villainous role. Even in the song sequences, Khan remains in character, moving like a hooded cobra ready to strike.

Konkana Sen, who plays Langda's wife, Indu, seems to live the role. She slips into the character effortlessly. For the length of the movie, you feel she must be, in reality, some smart-talking, sassy village belle who has no qualms or illusions about life.

After a long time, Vivek Oberoi, as Kesu, provides a good performance. He looks like the fool and perfectly fits the character of a gullible, unsuspecting, educated goon who does not realize both Langda and Omkara are using him.

Deepak Dobriyal, as Rajoh, shows he can act; he morphs from the distraught bridegroom who realizes there is going to be no marriage to the conniving man out for revenge.

Fourth, the movie provides an accurate illustration of the politics of power. Fools do not deserve power, even if they have a large following and, in fact, it is dangerous when they possess it.

By fools, I refer to both Omkara and Kesu. Omkara considers himself a power broker but does not know even the basic rules of politics - beware of sycophants whom you have ignored or slighted, and always initiate communications, explain your actions, and apologize if you have to, so others understand they are not being purposely lied to or betrayed.

Saif Ali Khan (Langda) and Ajay Devgan (Omkara)
Kesu is a fool with a good heart and short temper. His weakness is that he is manipulated and does not even know it. This makes him unfit to be a politician. However, some of the scenes are very realistic and one can see such events occurring in today's Uttar Pradesh, like the demand by a minor politician in power to change the destination of the train.

…Or Not to Praise

The movie is not without its negatives:

First, many of the actors have been miscast. Naseerudin Shah looks more like Gandhi rather than a wily politician who uses others to get rid of his opponents. Bipasha Basu is completely wasted in her role as Billo as no use is made of her talents. Any item girl would have been able to do Billo. Both Kareena Kapoor and Ajay Devgan fail as the lead characters as there is no on-screen chemistry between them. In addition, their performances lack the authenticity to make the audience feel with them or for them. As a result, you do not feel sad, frightened, or even sympathetic towards them. One does not fear for Dolly's life the way one does when watching Julia Roberts in Sleeping With the Enemy. Most of the times, you wonder what in the world Dolly is doing, putting up with such an abusive man. While at least Kapoor may be excused on the grounds of limited characterization, Devgan as the suspicious, insecure Omkara completely fails to impress.

Second, the saying "Too many cooks spoil the broth" is apt for the screenplay. When you try to adapt a 385-year-old play written by William Shakespeare, it is absurd to have three people like Robin Bhatt, Vishal Bhardwaj, and Abishek Chaubey do the adaptation. While they remain true to the beginning and the end, in the process, the writers have crammed in too many details, making the story seem absurd. Take the name Dolly. It is highly unlikely you can walk into some part of Uttar Pradesh and find a "Dolly" who is a Hindu Brahmin girl. "Damayanthi" or even "Diya" would have been appropriate names, if they still wanted to stick with the first letter, D.

Another absurdity is Kesu teaching Dolly how to play acoustic guitar and sing Stevie Wonder's famous song, "I Just Called to Say I Love You" so she can sing it to Omkara! If that is not absurd enough, Kesu insists that she sing with an American accent! Please, this is an Indian village mafia-story where no one speaks even chaste Hindi, let alone English, and that too with an American accent!

At times, it gets unreal. First, the lead pair live together openly before marriage and no one objects to this! In rural Uttar Pradesh, one of the most conservative and patriarchal regions in India, such behaviour is not tolerated, let alone condoned. Just when you think things cannot get any more absurd, after a night of love-making, when Omkara tries to wake Dolly by singing to her, promising anything she wished for, all Dolly asks for is that he forgives Kesu! No sane woman would do that unless she wants trouble!

The ending is too abrupt as are the wisecracks that are far too many than needed. The justification of the suspicion fails all logic. Omkara gives Dolly a cummerbund (a piece of jewellery worn around the hip), an heirloom worn by women of his family. Indu steals it and Langda takes it from his wife and gives it to Kesu, to give it to his mistress Billo. When Omkara sees Billo wearing it and dancing, he becomes positive that Kesu and Dolly are having an affair. The logic is that Dolly gave it to Kesu so he can give it to his mistress! Omkara's suspicion and murder appear far-fetched considering he was forced to punish Kesu when the latter had beat up Rajoh for blowing smoke at Billo, making her cough.

The movie fails to evoke fear or sympathy, making it an emotional dud. There has been a lot of media hype about the actors' performance, but it is a delivery with no soul as most of the actors have stardom but lack depth.

Had Shakespeare been alive, he would probably smile and tell Vishal Bhardwaj to stop adapting his plays and start writing his own stories, making his characterization relevant to the 21st century. After all, the world has changed and it is absurd to be true to the original ending that may have been relevant 450 years ago in Europe, but not to today's Europe, let alone India. Yes, suspicion is a dangerous thing in reel and real life.

It becomes especially relevant to our world today as there is rising suspicion based on race, religion, and region. Sadly, it does kill even today and that makes Omkara, despite all its faults, interesting to watch.
----------------------------------------------------------------------------
Deepa Kandaswamy is an award-winning writer, political analyst, and engineer based in India. Her articles have been published in six continents and some of her writing credits include ABC News, Ms., Truth Out, Data Quest, and Middle East Policy. She is the founder–moderator of the International Gender Lobby, which is a global networking platform for individuals, organizations, and activists who are interested in working for human rights, peace, and development worldwide.