On the Verge of Critical Stage

The presidential elections have never been so critical up till now in modern Turkey's 80-year history. The most important motivation of this stage is that throughout all the history of the Turkish Republic and the last 200 years of the Ottoman Empire, the 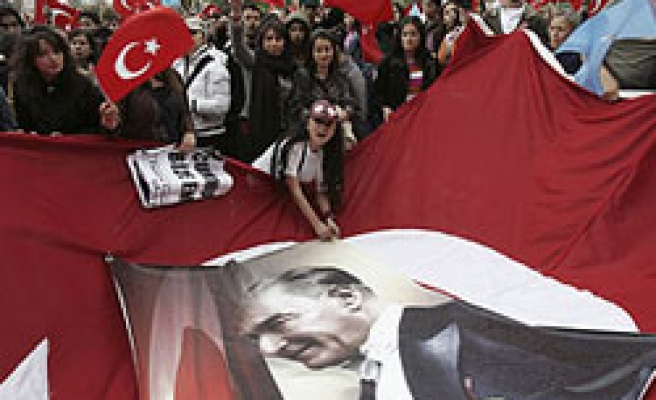 Who are these elites? They are the people of big enterprises, the army, universities, high courts, and the important posts in some ministries and big trade unions.

Hours before the army memo was sent to the Constitutional Court, in a bid to stop the Islamists' advance towards the presidential palace, Foreign Minister Abdullah Gul, the presidential nominee of the ruling Justice and Development Party (AKP), fell short of getting elected to the post. He could not get the 367 votes necessary to qualify him for the palace, after the opposition parties boycotted the first voting session of the parliament held on Friday, April 27.

In the first two rounds of voting, a two-thirds majority of 367 is required, but in the third round that needs at least 276 votes, Gul is strongly expected to assume presidency in the normal course of events as his party holds 353 seats in parliament. The second session is scheduled for May 2, the third for May 9.

The Republican People's Party (CHP), which harshly opposes Gul's nomination, applied to the Constitutional Court to get the vote session annulled saying the number of deputies at the session was less than 367, which is the needed two-thirds of deputies.

The Court has to decide whether the process could go ahead or it should be canceled. If the Court upholds the appeal, Turkey will face early parliament elections in three months.

Referring to the army's recent warning of taking actions when necessary, the government spokesman and Minister of Justice Cemil Cicek said the timing of warning was "meaningful" and that it would be perceived as an "attempt" to influence the judiciary decision.

The army said, on its website, that the presidential elections debate was focused mainly on Turkey's secularism and that it was following this debate with "concern." It also said the Turkish Armed Forces would "openly display its position and attitudes when it becomes necessary. "

In spite of the fact that Turkey is a parliamentary democracy, the president has more authorities than the parliament and prime minister, although the latter is the head of all implementations.
In Turkey, all the critical institutions' heads are chosen by the president. Some of these are the Constitutional Court, the Courts of Appeal, the Council of State, the Higher Educational Council (YOK), and universities rectors. In addition, many important appointments for higher posts in ministries are done also by the president. Furthermore, all the amendments proposed by the parliament have to be approved by the president.

It is claimed that the last constitutional amendments in 1982, done under the army's authority after the 1980 coup, have established a balance between the average people and the elites in Turkey.

After the first democratic elections in the 1960s, the Turkish people always punished the elites' community by supporting other pro-democracy candidates. So, the elites supposed that in this way they would lose their authority and control on governance; that is why they came up with new rules in the 1982 constitutional amendments.

In its 80-year history, the Turkish Republic has had 10 presidents, but Just Turgut Ozal was seen out of the elites and was portrayed as a "civil, democrat and devout" president who made many extraordinary changes. Incumbent Prime Minister, Recep Tayip Erdogan, has always highlighted Ozal's changes and pointed out that any new president has to follow his way.

If one who reflects the public opinion assumes the presidential seat, in which ways will they change Turkey? Initially, I think they will make some good progress on the extended debatable issue of woman's headscarf.
At least they will remove the embargo on women wearing the headscarf and looking forward to entering the Presidential Palace. In addition, They will open the way to everybody who wants to graduate freely in universities, which are now in a very low rate when it comes to scientific research when compared to the world average universities.

In this reform process, the universities — which are now completely engaged in the political process — would probably return to their essential job.

In the recent demonstrations arranged by the country's secularist groups and the Association of Pro-Ataturk Thought, the universities played a crucial role in bringing a big number of people to the streets. And recently, the Rectors Committee of Universities gave an ultimatum to the government, asking it not to nominate anyone who is not pro-secularism.

The new democratic president would probably encourage the government to remove the National Security Council (NSC) that is under harsh criticism by human rights organizations. The NSC, whose half of its members are from the government and the other from the army's generals, is convened under the chairmanship of the country's president.

Beyond doubt, the most important task of the new president would be the way of handling the courts' neutrality that is under question now.

One might ask: What are the real motivations behind all these political clashes? Why does the People's Republican Party (CHP) try to show all these events as the regime's sole problems? Why does incumbent President Ahmet Necdet Sezer, whose term in office is coming to an end, speak so harshly against the government and claim that the regime is under a threat of moderate Muslims?
He claims that these moderates hide their real intentions and when they have an opportunity they will change to extremism. Why do all the leftists, secularists, elitists, and pro-Kemalists, and the nationalist newspapers try to provoke the army against the government upon baseless claims?

The CHP sees itself as a speaker for the country's leftists who generally defend the secular principles of the state.

This was the case in particular when the leader of CHP Deniz Baykal criticized Erdogan in a way that got over the limits of democracy, human rights, and even the limits of secularism. His words like "We will not permit him" and "Don't permit him" are very known and have been disputed for a long time by the public opinion. How can these words be said in democracies? Baykal's words are allegedly full of messages to the army to avert Erdogan.

In the CHP's world, the main conception is "we and others."
In their interpretations, anyone who has devout religious sentiments can be called extremist, radical, and someone who uses religion for his or her personal interests.

All the time they forget that Turkey is a country with a 99 percent Muslim population.

Mumtazer Turkone, One of the leading intellectuals and columnists of the Turkish daily Zaman, displays clearly the mentality of the CHP:

Actually, Ozdemir Ince — the columnist of the daily Hurriyet and a very harsh secularist — reflects the mentality of the CHP and the secular front saying, "The ones who see their Qiblah [direction of Islam's holiest mosque, the Ka`bah, to which Muslims turn whenever they pray] as the Republic of 1923, don't need any guide."

The AKP is currently the strongest party in Turkey. In all public opinion polls, it gets ahead of all. The second strongest party is the secular CHP, whose support is continuously lowering down.
The CHP could not do any important reforms in the headscarf issue, fighting corruption, decreasing the role of the army on politics, supporting the European Union process, while the AK Party made many breakthroughs in such fields.

Initially, the economy of Turkey doubled in four years. Turkey's export jumped from US$30 to 90 billion. The GDP bounced from US$200 to 400 billion. The foreign direct investment is about US$30 billion a year. Turkish businessmen have spread all over the world because of the stability of the economy.

In many fields — including health, education, infrastructure, communication, transportation, and taxation —, this government has undersigned historical reforms. Turkey's prestige is upward by Muslim countries and Westerners. The Prime Minister and his cabinet have stepped all the corners of the world for new achievements and for establishing new bridges.

Now Turkey is caught in a deadlock about electing its new democratic, civil, president who would hopefully accept the opinions and thoughts of the others.

For the following days to come, Turkey will take new steps for new horizons. These elections are not just important for Turkey, they are also very vital for the Middle East, Europe. Turkey will be more courageous for being a member of the EU and will be a good democratic model for the rest of the Middle East if it could wisely end its current critical crisis.

Cumali Onal is a Turkish journalist based in Cairo. He is the diplomatic correspondent of the Turkish Zaman newspaper.