One day of mourning, funeral held for killed politician in Lebanon

Tens of thousands of mourners marched in a funeral procession Thursday for a prominent anti-Syrian legislator killed by a car bomb. 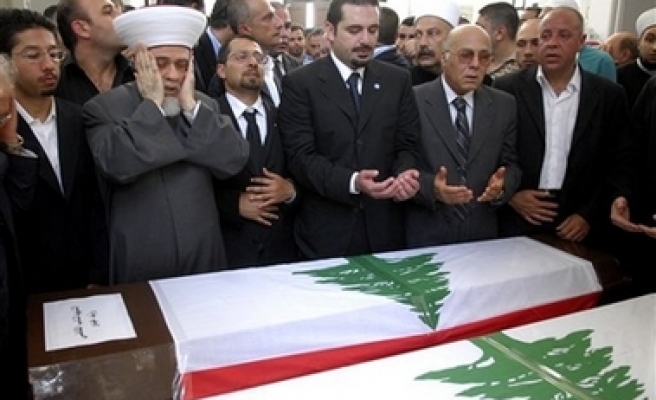 Tens of thousands of mourners marched in a funeral procession Thursday for a prominent anti-Syrian legislator killed by a car bomb.

Lawmaker Walid Eido was killed in a blast Wednesday.

Prime Minister Fuad Saniora called for an emergency meeting of Arab foreign ministers and the international community to assist in the investigation of Eido's assassination in Beirut.

The bomb ripped through Eido's car as he drove from a seaside sports club, also killing his 35-year-old son, two bodyguards and six passers-by — 10 people in all.

Businesses, schools and government offices were closed Thursday after the government declared a day of national mourning.

The bodies of Eido, his son and a bodyguard were taken in ambulances draped with Lebanese flags from the American University Hospital in West Beirut to a mosque at the Shohada Cemetery several miles away for a prayer service and internment.

Tens of thousands escorted the procession as it passed through the main thoroughfare of Corniche Mazraa in the Muslim sector, where pictures of the slain politicians were posted on walls and overpasses.

Marching behind the ambulances were Hariri's son, Saad, who leads the anti-Syrian majority bloc in parliament to which Eido belonged; Druse politician Walid Jumblatt; and other prominent anti-Syrian leaders.

Mourners waved Lebanese flags, those of Hariri's Future movement and banners of various Sunni factions. The crowds shouted the Islamic cry "There is no God but Allah" and slogans in support of their leaders.

Some applauded or blew whistles as the coffins drove through the packed street of Tarik Jadideh.

At the mosque, male relatives sobbed and bent to kiss the side-by-side coffins of Eido and his son. The spiritual leader of Lebanon's Sunni Muslim, Grand Mufti of the Republic Sheik Mohammed Rashid Kabbani led the prayers with Saad Hariri at his side.

Hariri said Lebanon will not kneel before the killers and promised they will be brought to justice.

"We fear only God Almighty. We will stay the course with righteousness, justice and calm. But no one should think that this people will kneel and be frightened," he said. "I tell the criminals, 'You will be punished and you will be dragged to prisons and will face justice,' God willing."

It was not clear when the funerals of the others would be held as some of the bodies have not been identified yet. Authorities on Thursday identified a lawyer among the dead after running DNA tests.

Hariri had urged his supporters to keep calm during the funeral, to avoid any eruption of violence.

At the site of the explosion by Beirut's seafront, a dozen Lebanese security agents searched for evidence near four charred cars. Across the street, about 50 angry young men on motorcycles chanted pro-Hariri slogans.

The Lebanese military and police had already imposed heavy security measures around Beirut in reaction to a series of bombs that have hit the capital since the Nahr el-Bared fighting began. Those explosions killed two people, yet another layer of instability rattling the country.