"Sadaf started consuming opium seven years ago after she could not find any medicine to overcome a headache that had bothered her for weeks. "When I first smoked opium I felt dizzy for a while, but ..... " 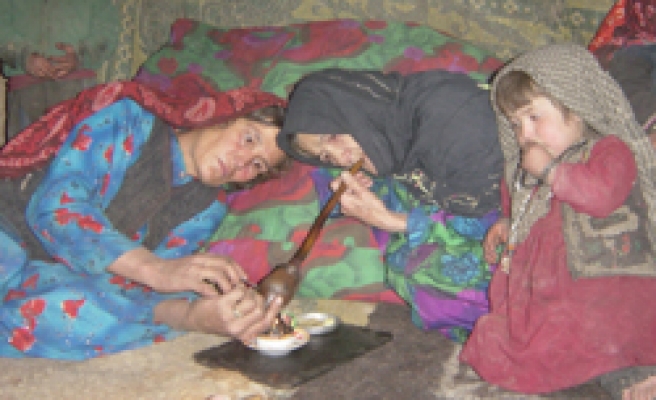 Sadaf started consuming opium seven years ago after she could not find any medicine to overcome a headache that had bothered her for weeks. "When I first smoked opium I felt dizzy for a while, but did not have a headache - so I continued," the mother of four said in the Yamgan District of Afghanistan's northeastern Badakshan province.

Sadaf smokes locally produced opium with a tiny hookah thrice a day with her children huddled around her. In the intoxicating atmosphere of the mud hut filled with opium smoke there is no chattering by her children; they look dazed and silent.

Grabbing the head of her four-year-old son who suffers pneumonia, the mother put a blowback of smoke into his mouth and puffed a second breath at his face. "I do this to make him calm and sleep well," Sadaf said to justify her actions.

"Some mothers think when their children do not cry and sleep they are fine," said Zaki, "but that is simply incorrect and misleading".

With some 1,600 mothers dying per 100,000 births, Afghanistan has one of the worst maternal mortality rates in the world, officials at the United Nations Population Fund (UNFPA) office in Kabul said.

In Badakhshan, 6,500 mothers out 100,000 die while giving birth - the highest maternal mortality rate in the world, the UN agency says.

Opium abuse exacerbates the situation, specialists say. Women who consume opium during pregnancy loose much of their energy and become venerable to different diseases, the provincial health department reported.

"Most addicted mothers suffer asthma, coughing and lung problems which make them very weak to endure the burden of pregnancy," a local health worker said.

Health workers say some addicted mothers also loose the chance of a future pregnancy because opium addiction damages their uterus.

Addiction has put a heavy financial burden on many poor families, plunging them deeper into poverty and social insecurity.

"I’ve been spending 200 Afghani [US$4] on opium every day for the past seven years. I sold my land in order to afford my addiction," another addicted woman, Bibi Mullah, said.

Badakhshan, one of Afghanistan’s most isolated, underdeveloped and poverty-stricken provinces, has a rugged terrain that impedes movement in its sparsely populated districts.

There is no official data about the number of drug addicts in Badakhshan. However, the United Nations Office for Drugs and Crimes (UNODC) says one million people have drug addiction problems in Afghanistan of which 45,000 are women.

According to Mohammad Alim Yaqoobi, head of the UNODC office in Badakhshan, the majority of people in Badakhshan lack access to health services and awareness about the harm of opium addiction.

"People tend to consume opium as a painkiller. It takes time until they actually realise that opium itself is a disease and that they are addicted to it," added Yaqoobi.

Locals in the district say if health services were provided they would not use opium as a substitute for medicine.

In Yamgan and many other districts of Badakshan, donkeys are the only means of transport for the locals. A resident of Jokhan village in Yamgan District needs two days, either on foot or by donkey, to reach the nearest medical facility. Opium is thus considered a readily available option.

However, given the high rate of illiteracy in the estimated 900,000 population of Badakhshan, it is very difficult to maintain a robust public information campaign. Some 3,730 opium-addicted individuals who had received treatment in Badakhshan resumed opium consumption shortly after the rehabilitation, according to UNODC.