Armenians have voted in parliamentary elections billed as a test of democracy and a rehearsal for the presidential contest next year – a move immediately denounced by a main opposition party as flawed. 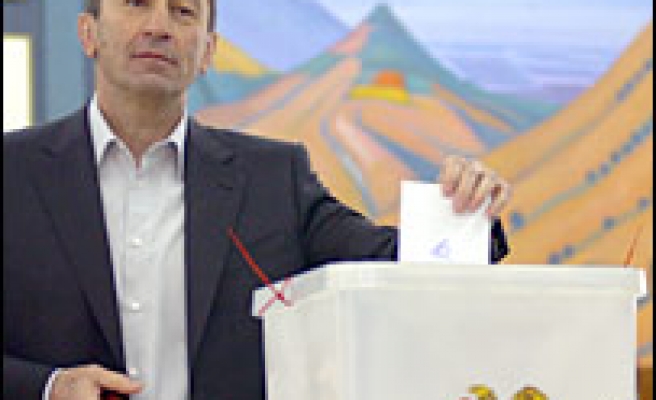 Armenians have voted in parliamentary elections billed as a test of democracy and a rehearsal for the presidential contest next year – a move immediately denounced by a main opposition party as flawed.

"I fear these elections were grossly falsified," Tigran Mkrtchian, a spokesman for the Country of Law Party, said of Saturday's elections.

"This has been one of the worst elections possible."

He said: "We recorded widespread violations in many forms ... Some pro-government parties were giving bribes of between 4,000 and 20,000 drams ($11-$56) right in front of polling stations."

Election officials, however, said there were no major violations.

"We can say that we had a positive election," Garegin Azarian, chairman of the central elections commission, said.

Azarian said: "The election was held in a calm atmosphere and in compliance with the law."

Armenia does not have a history of free and fair elections.

No vote has been declared fair since 1991, when this small, mountainous republic became independent after the collapse of the Soviet Union.

A flawed election, this time, could cost the country dear, where more than 30 per cent of people already live on less than $2 a day.

US officials have said the provision of $235 million in aid to Armenia under the Millennium Challenge Fund would be threatened if the vote is deemed unfair.

Opposition parties have vowed to organise street demonstrations on Sunday in an attempt to overturn the results if fraud was suspected.

Surveys show Armenians are hungry for reform, with an overwhelming majority supporting radical change, but polls predicted pro-government parties will come out ahead in the election.

Initial results from 15 of Armenia's 41 polling districts showed the ruling Republican Party in the lead, the Armenian news agencies reported.

About 2.3 million of Armenia's three million people were registered to vote for 131 seats in parliament.

Hundreds of local and international observers were monitoring the vote, including more than 300 from the Organisation for Security and Cooperation in Europe, which was to issue a report on the election on Sunday.

The vote was also a dress rehearsal for a presidential election next year at the end of the second term for Robert Kocharian, Armenia's president.

Serzh Sarkisian, the prime minister and Kocharian's chosen successor, is expected to use the parliamentary vote as a springboard to launch his presidential campaign.