Turkish columnist Çongar said the MİT document will soon be submitted to the court as an addendum to the indictment by the prosecutor. 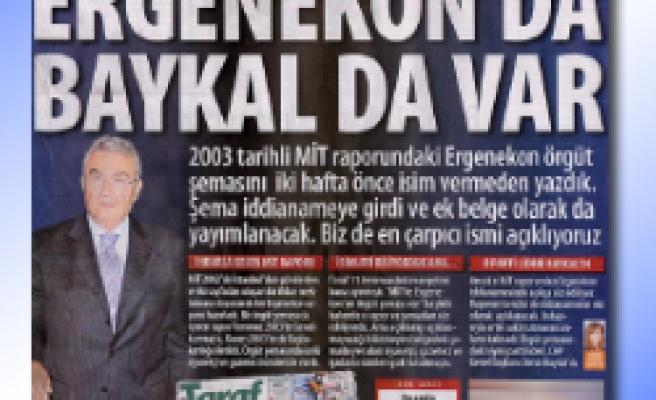 Famous journalists and politicians, including main opposition Republican People's Party (CHP) leader Deniz Baykal, are part of the Ergenekon gang, which is being accused of trying to topple the government by force, the Taraf daily claimed in its headline story yesterday.

According to the report, the National Intelligence Organization (MİT) prepared a report on Ergenekon in 2002. This report, which also includes an organizational chart, was submitted to the General Staff in July 2003 and then to the Prime Ministry in November 2003. Famous politicians and journalists are on the chart, Taraf claimed.

Taraf columnist Yasemin Çongar said the MİT document will soon be submitted to the court as an addendum to the indictment by the prosecutor, noting that there is no longer any sense in hiding the names of those on the chart. Çongar wrote that Baykal is on the chart.

She also wrote that a large number of media bosses and businessmen were also on the chart. However, she said: "It cannot be taken as proof that these people are working for Ergenekon, though it does show that a series of names, who are today in very active positions in politics, in the business world and in the media, were at some point reported to the Prime Ministry by MİT with the claim that they might have links to Ergenekon. The report emphasized that these are yet to be investigated."

She said that the 49th and the 50th pages of the Ergenekon indictment, which was submitted last week to a civil court of law, referred to the MİT report on the Ergenekon organization.

Çongar also pointed out that Baykal, in speech at his party's parliamentary group this week, was being overly defensive of the Ergenekon suspects. "He was like a 'deep' lawyer, making a shallow defense," she wrote in reference to the phrase "deep state," used in Turkey to refer to the phenomenon of Ergenekon-like structures and their influence on state affairs.

She also said that according to Taraf's sources, the MİT report itself will be attached to the indictment this Friday and made public and that the daily no longer saw any problem in announcing that the political leader mentioned in the MİT document to be made public soon is Baykal. "We don't know whether Baykal or other names in the MİT statement are attached to the Ergenekon group. But as I wrote earlier, we can say that these people were reported by MİT to the Prime Ministry on the basis of the claim that they might have links to Ergenekon."