The Parliamentary Assembly of the Council of Europe criticized a closure case against Turkey's ruling Justice and Development Party. 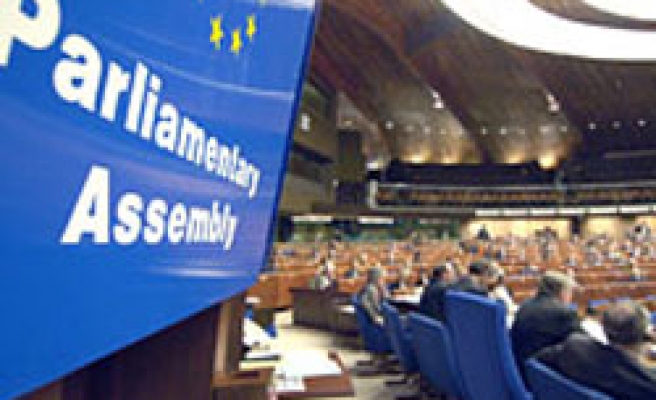 The Parliamentary Assembly of the Council of Europe (PACE) released a written declaration yesterday criticizing a closure case against Turkey's ruling Justice and Development Party (AK Party) and calling for reforms to bring the Constitution into conformity with European principles, adding to the European criticism of the case despite opposition charges that such expressions amount to interference in the Turkish judicial system.

"We are concerned about judicial proceedings recently instituted by the General Prosecutor in Turkey to dissolve the Justice and Development Party and ban 71 of its members from politics. We are concerned that the Constitutional Court has declared this request admissible," the declaration, signed by 21 members of PACE, said.

Last month, the Constitutional Court decided unanimously to hear an appeal from a top prosecutor to close Prime Minister Recep Tayyip Erdoğan's AK Party on charges that it had become a "focal point for anti-secular activities." The prosecutor has also sought a five-year ban from politics for 71 politicians, including Erdoğan and President Abdullah Gül. The European Union, which Turkey aspires to join, has harshly criticized the case and even warned accession talks with Turkey could come to a halt if the AK Party is closed down in the end.

The PACE declaration, which will be open to further signatures for the next two weeks, says that attempts to close parties continue in Turkey despite past reforms and notes that the European Court of Human Rights, which is also affiliated with the Council of Europe, has said in several past rulings that party closures contravened the European Convention on Human Rights (ECHR).

"Turkey has a legacy of political party closures. Cases concerning party closures have resulted in the European Court ruling that they contravened the ECHR. Despite reforms of the Constitution of 1995 and 2001 and of the Law on Political Parties in 2003, attempts to close parties continue," it says. "Further reforms are needed."

The government is expected to decide soon how to proceed with plans to change the Constitution in order to stave off the threat of closure; options available to it include either pushing for a comprehensive overhaul of the Constitution -- a legacy of the 1980 military coup -- or presenting a smaller package of reforms that will include amendments to make party closures more difficult along with some other urgent political reforms. The PACE declaration encourages the government to go ahead with the planned reforms: "Encouraged by the resolute commitment of Turkey to pursue the democratic reform process, we urge Turkey to consider without delay further constitutional and legislative reforms to conform fully with the ECHR," it says.

The PACE condemnation of the closure case has been at the heart of a bitter controversy in Turkey over the past few days. PACE President Lluís Maria de Puig triggered a heated debate here when he said in televised remarks earlier this week that the request for a statement criticizing the closure case came from the Turkish delegation to PACE.

Members of the Turkish delegation from the opposition Nationalist Movement Party (MHP) and the Republican People's Party (CHP) said they had no information about the delegation making such a request, blaming members from the AK Party for requesting PACE to condemn the closure case against their party. The two parties, as well as many media commentators, then accused the AK Party of seeking European intervention in a domestic matter and trying to build pressure on the Constitutional Court.

Mevlüt Çavuşoğlu, a member of the AK Party and the head of the Turkish delegation to PACE, has denied that AK Party members made such a request. Responding to questions from reporters yesterday, Prime Minister Erdoğan also said the opposition parties could not substantiate their claims by presenting any evidence and accused the opposition parties of trying to carry a domestic government-opposition confrontation to Europe.

Murat Belge, a columnist for left-leaning daily Radikal, yesterday ridiculed charges that the AK Party "ordered" the Council of Europe body to issue a declaration condemning its closure case. "I was not aware that the AK Party had such credibility in European institutions. It seems it enjoys very high credibility; it wants a declaration when it needs it and PACE then says 'yes, sir' and immediately gets to work to release it," he wrote. He then went on to explain his theory of what might have happened, saying that PACE and its president were already of the view that the closure case was not in compliance with the very well-known democratic principles of the Council of Europe. "He was probably told [by AK Party members] something like 'now that you have this view, wouldn't you like to express it in a statement?'" Belge said, adding, "I would have made the same suggestion."

The PACE declaration says it respects "the independence of the judiciary and prosecution," but adds: "We emphasize that the freedoms of association and expression are essential in a pluralist democracy. Forming and joining political parties and expressing political opinions are integral parts of the rights guaranteed by Articles 10 and 11 of the ECHR. This includes opinions which amount to seeking to change the constitutional order, provided they do not incite to violence."

"We expect the Turkish prosecution authorities and judiciary to respect the case law of the European Court of Human Rights when considering political party closure and bans on individual members," it also says.

The declaration will be binding only on members who sign it. Presidents of four out of five political groups represented at PACE, namely Luc van den Brande of the Christian Democrats, Andreas Gross of the Socialist group, Matyas Eörsi of the Liberals and Democrats and Tiny Kox of the Leftist group are included among 21 signatories of the declaration.

No Turkish lawmaker was among the signatories of the text as of yesterday afternoon.