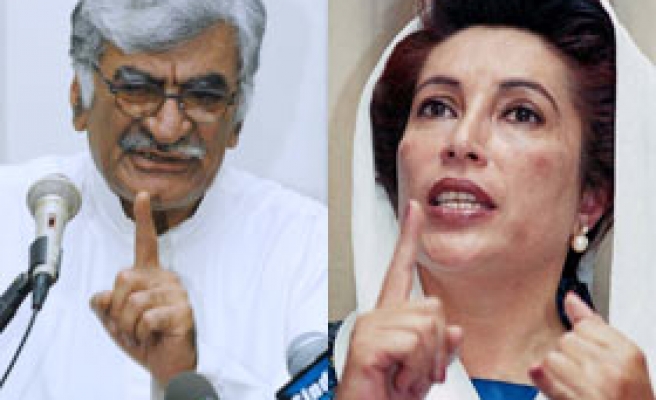 "It is very much possible that all the secular and liberal forces get united, and form an election alliance against them in the forthcoming elections," Haji Muhammad Adeel, Central Secretary Information of Awami National Party (ANP), told IslamOnline.net.

"Yes, we are trying for that."

ANP President Asfandyar Wali Khan is the main player in the ongoing move to form the proposed secular alliance.

He met the self-exiled leader of Pakistan People's Party (PPP), former premier Benazir Bhutto, in Dubai last month to discuss the formation of the alliance.

Adeel confirmed the meeting and said it was part of his party's ongoing efforts to form an election alliance of secular and liberal forces.

"We have made such efforts in the past too. It has happened in the past when opposition parties had contested elections from one platform, and we wish this happens again."

Adeel said it is not an impossible task but the chances of this happening is very much possible.

"We are waiting for the election schedule. As soon as the schedule is announced, you will see a major breakthrough in this regard."

The next general elections are expected to be held by the end of 2007 or by early 2008.

"The new alliance may include progressive forces like the ANP, PPP, the Pakistan Muslim League (PML) and Pakistan Oppressed Nationalities Movement."

He believes that joint efforts are required to counter the growing influence of religious forces in the political arena.

"It's not that the secular parties cannot compete with the religious forces individually. They can, but it will be much better to get united and face them in the coming elections."

The ANP conceded the worst ever defeat in 2002 elections in its stronghold NWFP at the hands of MMA and could not even win a single national assembly seat in the province which borders Afghanistan.

Analysts believe that the major reason behind ANP's defeat was its support to the US invasion of Afghanistan in 2001.

During the Cold War, the ANP had been a staunch supporter of the defunct USSR.

However, following the ouster of Taliban government, the nationalist party changed its longtime stance and supported the American policies.

Adeel said his party wanted to form this alliance on national level.

"We don't want to restrict the proposed alliance to NWFP and Balochistan only. We want that all the liberal forces get united on national level."

Political sources say that a ruling coalition partner, Muttehida Qaumi Movement (MQM), which has a considerable influence in the urban areas of southern Sindh province, has also initiated an "informal" dialogue with the PPP for cooperation against religious forces.

If the PPP-MQM talks progress satisfactorily, a meeting between Altaf Hussain and Bhutto in London may also materialize in not too distant a future, they expect.

Farooq Sattar, MQM parliamentary leader, confirms that there have been some "informal" discussions between his party and the PPP for political and electoral cooperation.

"The parties, which believed in politically marginalizing the religious right and which had a moderate and progressive agenda, must encourage and promote enlightened moderation as advocated by President General Musharraf," he opined.

"We understand the president's approach to issues is finding favor with the PPP," he said.

"The PPP, it seems, is willing to hold talks with the regime. We feel that dialogue, and not use of force, is the right path," Sattar said referring to ongoing under-hand talks between Musharraf and Bhutto for the future set-up.

The PPP spokesman, Ejaz Durrani, said there is a possibility of seat adjustment with like-minded parties in coming elections.

"I am not in a position to say that which party will be our ally in the next elections, but it is for sure, our allies will be the liberal and moderate forces only."

Ejaz said his party would not take any unilateral decision in this regard.

"We will take any definitive decision in this regard from the ARD (Alliance for Restoration of Democracy) platform", he added.

ARD, an alliance of 18 political parties, has been formed by the two former prime ministers, Bhutto and Nawaz Sharif, barred by the military regime from running in the last elections.

Sources say the ANP and the PPP are willing to accept Musharraf as a civilian president.

ANP Secretary General Ahsan Wyne told a press conference a few days back that his party had no objection to Bhutto having a dialogue with the military regime for an end to the political stalemate as long as she does not compromise on the uniform issue.

Musharraf came to power in a bloodless military coup in 1999, and has since refused to shed his uniform as army leader despite pledges to do so.

Analysts believe that the secular alliance can damage the popularity of the MMA in NWFP and northern parts of Balochistan, bordering Afghanistan, only with the government support.

"In my opinion, that would be a Herculean task for the secular forces, even if they get united, to damage the MMA vote bank in NWFP and northern Balochistan, without government support," Abdul Khalique Ali, a journalist and political analyst, told IOL.

He cites the secular parties' tilt towards American policies, ongoing military action in tribal areas and the relatively better performance of the MMA government in NWFP.

Transparency International has recently declared NWFP the most financially disciplined province in Pakistan.

Punjab and Sindh, ruled by the ruling PML(Q), were branded the most corrupt provinces respectively.

"The latest by-elections in NWFP on a national assembly seat is a testimony to the fact, where all the rival candidates could not jointly get even one-fourth votes secured by the MMA candidate," he recalled.

The by-election was won by MMA candidate by securing over 74,000 votes as against 4000 and 2000 votes secured by PPP and ANP candidates respectively.

"In any case, the government has to favor the proposed alliance to win the next elections in NWFP and northern Balochistan."