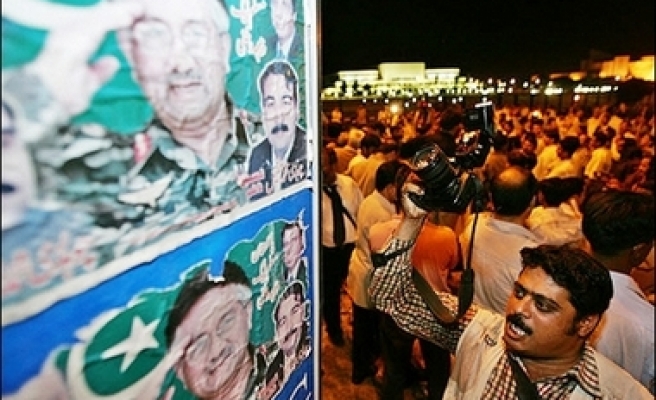 The arrests were made ahead of demonstrations planned on Thursday against Musharraf's move to oust the head of the country's Supreme Court, Iftikhar Muhammad Chaudhry.

"The government is acting like a mad elephant," said Nazir Dhoki, a spokesman for the Pakistan People's Party of former prime minister Benazir Bhutto.

A senior interior ministry official told AFP around 350 people had been detained for "violating the government ban on street protests throughout Punjab province."

The government earlier this year imposed a ban on all gatherings of five or more people in Punjab, Pakistan's most populous region and its political heartland.

Officials said some 200 were held on Monday and Tuesday with another 150 detained overnight and early Wednesday. Most of the arrests were made in the provincial capital Lahore, Rawalpindi, Faisalabad and Multan.

Prime Minister Shaukat Aziz defused some tensions by ordering the immediate withdrawal of a police complaint against 200 journalists who protested curbs on the media in Islamabad on Monday, an official statement said.

A senior lawyer meanwhile filed an appeal in the Supreme Court against a decree issued by Musharraf on Monday granting tough new powers to the body that regulates the electronic media.

Lawyer Zafarullah Khan's petition said the people of Pakistan were "stunned" by the measures.

The rules came into force as three private television stations said the government had blocked their transmissions because of their coverage of rallies addressed by Chaudhry.

The chief justice, who on Saturday told some 25,000 supporters that they had the support of the people of Pakistan, has become a focal point for opposition to Musharraf's dual role as president and army chief.

The protests turned violent in the southern city of Karachi on May 12, leaving more than 40 people dead.

Critics say Chaudhry's suspension on charges of nepotism and misconduct was designed to tame the judiciary and allow Musharraf to stay in uniform beyond 2007, when the constitution says he should become a civilian ruler.

The judge has challenged his ouster.

One of Chaudhry's lawyers, retired judge Rasheed Razvi, was in Hong Kong on Wednesday, where he urged the United States and Britain to put pressure on Musharraf to ensure fair elections.

In Washington, key US lawmakers wrote to Secretary of State Condoleezza Rice to publicly call for an immediate end to ongoing unrest in Pakistan and urge Musharraf to hold "free and fair" polls.