Pakistan's supreme court has resumed hearing a petition challenging the suspension of the chief justice by General Pervez Musharraf, the country's president. 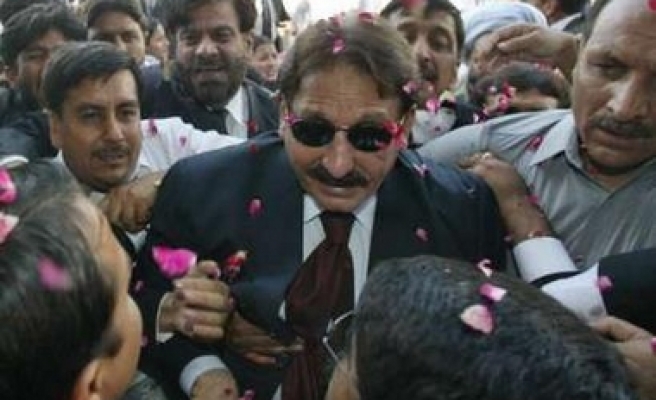 Pakistan's supreme court has resumed hearing a petition challenging the suspension of the chief justice by General Pervez Musharraf, the country's president.

The supreme court is examining more than 20 petitions contesting the legality of the March 9 suspension, including one filed by Iftikar Muhammad Chaudhry, the suspended judge.

Aitzaz Ahsan, Chaudhry's main lawyer, meanwhile has alleged that a senior court official shot dead on Monday, was killed for his ties to the suspended judge.

Syed Hamad Raza, supreme court's deputy registrar, was killed by gunmen at dawn at his home.

Raza was appointed by Chaudhry in 2005 and served as his personal assistant.

"Raza's murder was a targeted killing. It appears to be linked to the case," Ahsan told the court.

"He was under pressure from various government agencies."

Khalil-ur-Rehman Ramday, the presiding judge, said the court had "taken cognizance" of the mysterious shooting death.

"Each one of us was as shocked and grieved as anyone could be grieved over the matter," Ramday said. "We are watching. This court is watching."

Police blamed robbers for the killing, but several relatives of Raza claimed it was a target killing as nothing had been stolen from the house.

Ahsan told the 13-judge bench on Tuesday that the chief justice had been summoned to Musharraf's army office in Rawalpindi on March 9 and held there against his will for several hours.

Ahsan said Chaudhry had been pressured to resign - but did not say by who.

To press for Chaudhry's reinstatement, lawyers have mounted a series of protest rallies during hearings into the chief justice's case, and as he has travelled around the country to seek support.

An abortive visit to Karachi on Saturday by Chaudhry triggered violence between supporters and opponents of the government, which security forces made little effort to stop - resulting in the deaths of at least 41 people.

On Monday, an opposition call for a general strike to protest against the violence paralysed cities across Pakistan. Last Mod: 15 Mayıs 2007, 16:45
Add Comment