A panel hearing accusations of misconduct against Iftikhar Chaudhry, Pakistan's suspended chief justice, has itself been suspended by the country's supreme court. 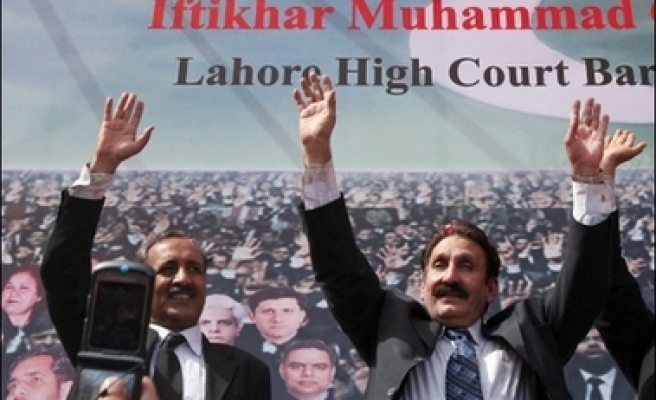 A panel hearing accusations of misconduct against Iftikhar Chaudhry, Pakistan's suspended chief justice, has itself been suspended by the country's supreme court.

Chaudhry had previously gone to the supreme court to question the competency of the panel, the Supreme Judicial Council.

The move on Monday is seen as a vindication of Chaudhry who has gathered public support for challenging government misdeeds.

Chaudhry was suspended by the government on March 9 and had challenged the competency of the Supreme Judicial Council, asking the supreme court to take up his case.

Tariq Mehmood, a lawyer for Chaudhry, said: "The Supreme Court has stayed the proceedings of the Supreme Judicial Council and has recommended the setting up of a full bench to hear the chief justice's petition."

Facing charges of misconduct he has refused to resign and his suspension has prompted massive demonstrations of support.

Kamal Hyder, Al Jazeera's correspondent in Islamabad, says the court's decision is a vindication of his view that the Supreme Council does not have the authority to try the chief justice.

Hyder said the decision could even represent a constitutional crisis and lead to political deadlock given that Pakistan's president, Pervez Musharraf, and his prime minister have said they would respect the findings of the Supreme Judicial Council.

On Sunday, Chaudhry addressed thousands of lawyers and supporters who had waited through the night for him to arrive in Lahore.

In a thinly veiled reference to Musharraf's government, Chaudhry said: "Nations and states which are based on dictatorship instead of the supremacy of the constitution, the rule of law and protection of basic rights get destroyed." Last Mod: 07 Mayıs 2007, 15:40
Add Comment