The ex-commando, who seized power in a coup nine years ago, has yet to make any public response after being given the option of facing a confidence vote in parliament or being impeached. 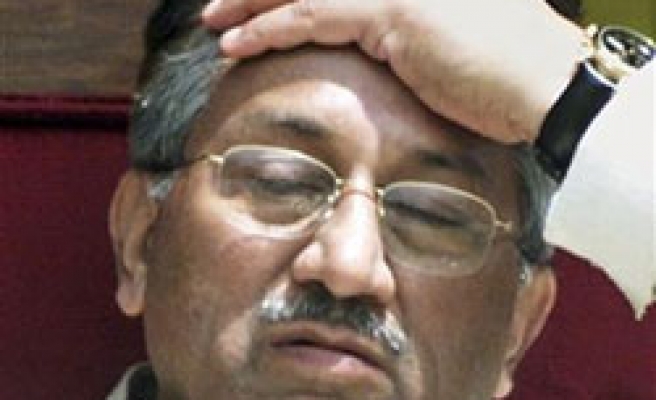 Eyes were on Pakistan's generals on Friday for any gesture of support for President Pervez Musharraf the day after a four-month-old civilian coalition declared plans to impeach the former army chief.

The ex-commando, who seized power in a coup nine years ago, has yet to make any public response after being given the option of facing a confidence vote in parliament or being impeached.

A session of the National Assembly, Pakistan's lower house of parliament, has been called for Monday, coincidentally Musharraf's 65th birthday, to start what could be a lengthy process unless the president decides to bow out without a fight.

A meeting of the army's top brass reconvened on Friday at the headquarters in Rawalpindi, the city neighbouring Islamabad.

A military spokesman said the meeting, which began on Thursday, was a regular gathering of corps commanders chaired by General Ashfaq Kayani, who Musharraf passed command to when he retired from the military last November. Although Kayani had been Musharraf's intelligence chief, civilian politicians have been encouraged by his efforts to withdraw the army from political affairs. Musharraf has said in the past he would resign rather than be dragged through an impeachment process by a parliament filled with enemies.

He has also said he will not use powers to dissolve parliament, but critics say the unpredictable president suffers from a "saviour complex", and he could do just that in order to remove rivals he believes are making a mess of running Pakistan.

To do it he will need the army's backing, something which analysts have described as a "worst-case scenario".

While the army had accepted a switch to civilian rule which began with the defeat of pro-Musharraf parties in an election on Feb. 18, it was supposed to be a transition, and the generals could react badly to any humiliation of their former chief.

Speaking to news channels on Friday, a leading member of the coalition, Chaudhry Nisar Ali Khan expressed optimism that Kayani would not let the army "meddle in politics".

Despite the uncertainty, investors in a share market that has lost 38 percent after peaking on April 21, recovered some nerve on Friday as the main index rose 2 percent. The rupee at 72.60/70 to the dollar was a brushing all-time lows struck a month ago.

Politicians and analysts believe the generals will want to watch how the situation unfolds.

"They will have their concerns, but having concerns is one thing and sending in the tanks is quite another," said Ayaz Amir, an anti-Musharraf politician in the National Assembly, and a former army major.

Musharraf was blamed for Pakistan's multiple crises by Asif Ali Zardari, the widower of slain two-time prime minister Benazir Bhutto and head of the coalition, and Nawaz Sharif, the premier Musharraf overthrew, as they announced plans on Thursday to impeach him.

Sharif's party said on Friday some ministers would rejoin the cabinet, having pulled out last May after Zardari backtracked on a commitment to reinstate Supreme Court judges Musharraf had dismissed during emergency rule late last year.