Police fired tear gas and bullets in the air to disperse a protest by Pakistani cyclone victims as rescuers battled more bad weather to get aid to 1.1 million affected people. 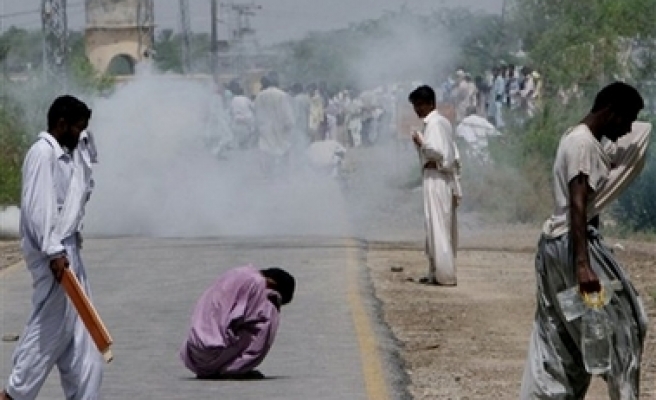 Police fired tear gas and bullets in the air to disperse a protest by Pakistani cyclone victims as rescuers battled more bad weather to get aid to 1.1 million affected people.

Around 1,000 people marched on the local government office in the flood-hit southwestern town of Turbat, saying they had received no relief goods since Cyclone Yemyin struck on Thursday.

"Our homes have been destroyed, there has been no water and no food for the last four days," Ghulam Jan, 27, a farmer from a nearby village, said during the protest.

"No government official or agency is helping us. We have no place to go, there is water everywhere," Jan said.

Most of Turbat was submerged and people sat on the roofs of their huts and mosques. After days of braving the rain they now faced blazing heat after the clouds finally cleared from over the town near the coast.

But helicopters bearing aid were again grounded because of continuing downpours in Quetta, the capital of Baluchistan province, some 550 kilometres (330 miles) to the northwest, where they are based, aid officials said.

Khuda Bakhsh Baloch, the Baluchistan provincial relief commissioner, said that 1.1 million people were now known to have been affected by the cyclone and subsequent floods.

"The situation is serious, we know that people are suffering," he told AFP. "The more rain that comes, the worse it gets."

"Yesterday we started providing aid for a few hours, we saved some lives but we couldn't do it properly because of the weather. Today we have been trying to start the helicopters since morning but it is impossible," he added.

The military says it has around a dozen helicopters and several cargo planes trying to airdrop water, food, shelter and medicine to people in the disaster zone.