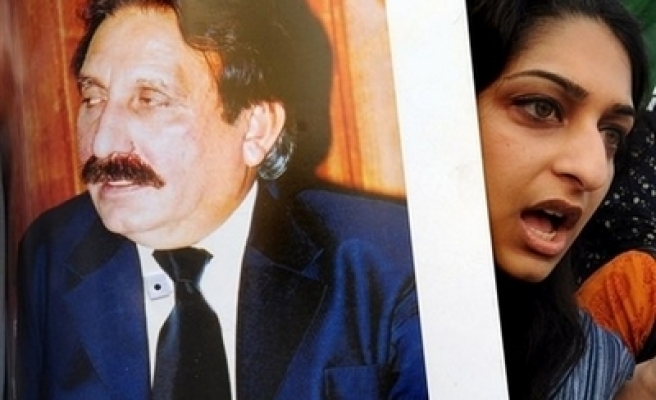 Around 200 people joined a rally at the residence of former judge Iftikhar Muhammad Chaudhry, who was sacked by Musharraf under emergency rule four months ago and remains under house arrest, a reporter witnessed

Shouting "Death to Musharraf, curse on Musharraf" and "Iftikhar Chaudhry is our hero", the protesters tore aside some of the coils of barbed wire and barricades blocking off the judge's house.

Riot police wearing helmets and carrying batons responded by firing at least half a dozen tear gas shells at the protesters. The demonstrators dispersed but started to regroup soon afterwards.

Some protesters held placards with photographs of the chief justice and his family.

The independent-minded Chaudhry became a pro-democracy symbol when he fought back against Musharraf's initial attempt to oust him in March 2007 over allegations of misconduct and abuse of power.

Musharraf finally sacked the judge when he declared a state of emergency in November, when it looked like the Supreme Court could overturn his victory in a presidential election the previous month.

Since Musharraf's allies lost heavily in elections last month, former premier Nawaz Sharif has been pressing for the release and reinstatement of Chaudhry and several other judges who were also deposed.

The protesters later kicked the car of Pakistan's attorney general when he visited the judges enclave in the capital, where Chaudhry and other justices are being held, local television reported.

The demonstration came a day after Pakistani authorities released a prominent firebrand lawyer and supporter of Chaudhry, Aitzaz Ahsan, who had also been under house arrest since the emergency.

Ahsan, who is president of the Supreme Court Bar Association, said on Monday that he would lodge a case against Musharraf and other senior officials for keeping the former chief justice and other lawyers under detention.

"We know Musharraf enjoys some immunity as president but we want to proceed against him for keeping the chief justice, his wife and children in unlawful detention," Ahsan told reporters.

The decision to withdraw the detention order follows February 18 elections in which the parties of slain former premier Benazir Bhutto and Sharif trounced Musharraf's political allies and decided to form a coalition government.

The winners last week demanded that Musharraf -- who seized power in a military coup in 1999 and stepped down as army chief in November -- convene parliament without delay.

But the coalition has still not said whether they will reinstate the judges as Sharif has demanded. Such a move could see Musharraf's re-election to a second five-year term declared illegal.