The party of slain Pakistani opposition leader Benazir Bhutto on Tuesday nominated a close associate of her widower to be parliament's first female speaker, but divisions remained over who should be the next prime minister. 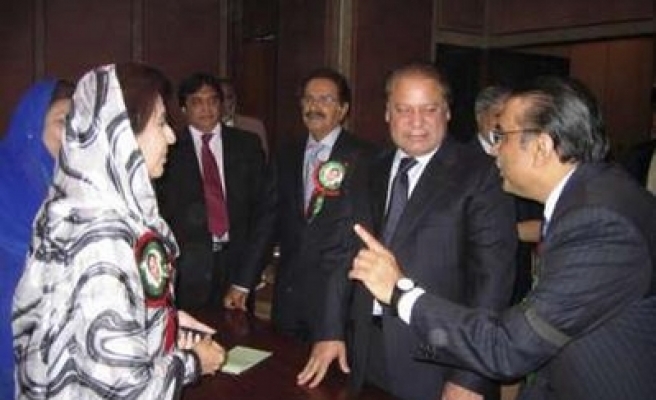 Fahmida Mirza, a businesswoman and three-time lawmaker, will become the first woman speaker of the National Assembly, or lower house, if approved as expected in a parliamentary vote Wednesday.

Her husband is a longtime confidant of Asif Ali Zardari, Bhutto's widower and the party's leader, who is thought to have a final say over the nominations.

The new parliament convened Monday for the first time since opponents of U.S.-backed President Pervez Musharraf swept to victory in last month's elections. They promise to slash his powers but face challenges themselves.

"Broken institutions are being handed to us and Musharraf is keeping powers for himself," said former Prime Minister Nawaz Sharif, who was ousted by Musharraf in a 1999 military coup and sent into exile until last November.

"God willing, we will take those powers from him," Sharif said late Monday at a dinner with lawmakers from his party.

With the second largest number of parliament seats, Sharif's followers have pledged to form a coalition government with Bhutto's Pakistan People's Party, which won the largest number. It falls to the PPP to name a prime minister, and party spokesman Farhatullah Babar said Tuesday an announcement would be made by next week.

Neither Mirza nor Kundi were mentioned as possible candidates for prime minister. But there is speculation that if Mirza, who is from Sindh province, becomes speaker, the prime minister would likely hail from the largest province of Punjab.

The initial front-runner for the job, Makhdoom Amin Fahim, has expressed frustration that his nomination has not been announced. Shortly after Bhutto's Dec. 27 assassination in a suicide attack, Zardari told reporters that Bhutto had wanted Fahim to be the party's candidate for prime minister.

"What have I done wrong to my party?" he said Saturday in an interview with Pakistan's Express news channel.

On Monday, Fahim passed by banners near parliament imploring him not to "betray" the party by insisting on the premiership — but still received a rousing welcome from fellow lawmakers in the house.

Fahim said he would only stand aside for Zardari. "If Zardari wishes to become prime minister, I will propose his name," he said.

The PPP's delay in naming a candidate for prime minister has fueled speculation that Zardari wants the job for himself. He is currently ineligible because he is not a parliament member.

However, Zardari could name a stand-in and run in a by-election within months. Still, there is uncertainty about whether he holds a college degree — a legal requirement for candidates.