A bomb killed 24 people in northwest Pakistan on Tuesday, while in the capital opposition politicians walked out of parliament, forcing the house to postpone a debate on weekend violence in Karachi. 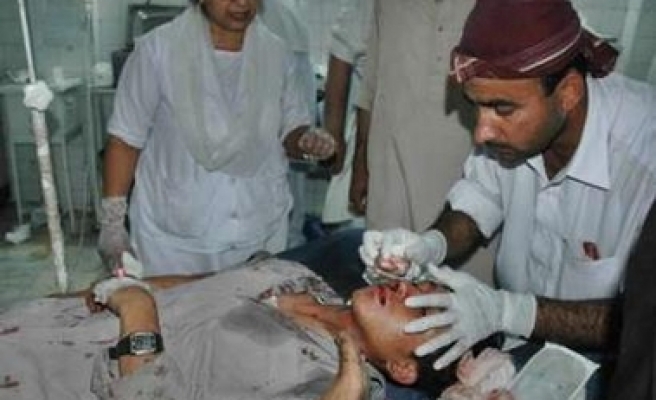 A bomb killed 24 people in northwest Pakistan on Tuesday, while in the capital opposition politicians walked out of parliament, forcing the house to postpone a debate on weekend violence in Karachi.

"My information is 24 people lost their lives in the blast and 25 to 30 were wounded," Asif Iqbal Daudzai, Information Minister for North West Frontier Province told Reuters.

The explosion ripped through the reception area of the four-story Marhaba Hotel in Peshawar's old city.

An intelligence official said the hotel was popular with Afghans and that it had been crowded with people eating lunch. The official asked that he not be named for security reasons.

"We do not know whether it was a suicide attack or if someone had put explosives in the hotel. I can only confirm that there was a big blast," provincial police chief Sharif Virk said.

One of the many Afghan refugees living in Peshawar described the impact. "I was in the kitchen when I heard an explosion and a wall of our restaurant fell on my feet," said Muslim Khan, an Afghan refugee.

Police said they had evacuated the hotel, which lies in a busy market area, cordoned off the scene and opened an investigation.

No one claimed responsibility for the suspected suicide blast in the lobby of a hotel popular with Afghans in Peshawar, capital of North West Frontier Province, where militants opposed to government support for the United States have launched attacks.

There was no indication the blast was linked to weekend violence between pro-government and opposition activists in the southern city of Karachi which killed nearly 40 people.

A Reuters photographer in Peshawar saw lifeless bodies strewn amid pools of blood and body parts on the floor of the Marhaba Hotel, near a main city mosque.

"It is terrorism but who did this or who is behind it, it is premature to comment," said Syed Kamal Shah, federal interior secretary.

The blast is bound to add to a sense of crisis in Pakistan, where the worst political street violence in years erupted in Karachi on Saturday when the country's suspended top judge tried to meet supporters in the city.

Government attempts to remove Chief Justice Iftikhar Chaudhry over unspecified accusations of misconduct, leveled on March 9, have outraged the judiciary and the opposition and snowballed into a campaign against President Pervez Musharraf.

The campaign is the most serious challenge to the authority of Musharraf, who is also army chief and an important U.S. ally, since he seized power in 1999.

The opposition blames Musharraf and the pro-government Muttahida Qaumi Movement (MQM), which runs Karachi, for the weekend violence there when rivals with automatic weapons battled for hours on the city's streets.

About 150 people were wounded in the clashes between pro-government activists, who opposed the visit by suspended Chief Justice Iftikhar Chaudhry, and opposition supporters backing him in his confrontation with the government.

Musharraf blamed Chaudhry for the violence, saying he had ignored appeals not to visit the volatile city.

On Monday, a nationwide opposition protest strike against the violence in Karachi virtually shut it and other major cities down. Karachi is Pakistan's biggest city and its business hub.

Opposition politicians walked out of parliament chanting "Go Musharraf Go," forcing the house to postpone a debate on weekend violence.

They also shouted "Musharraf murderer, MQM murderers" before a ruling party member chairing the session read out a presidential order to indefinitely postpone it.

A Supreme Court hearing into a petition by Chaudhry against an inquiry into the misconduct accusations he faces began in Islamabad with Chaudhry's lawyers presenting their case.

Musharraf has called for the courts to be allowed to settle the case and has criticized lawyers for politicizing it. He has also ruled out a state of emergency and said elections due late in the year would go ahead.

In Karachi, life crept back to normal after the violence and Monday's protest strike.

Authorities have banned demonstrations and authorized 13,000 paramilitary troops to shoot anyone involved in serious violence in the city, which has a history of bloody feuding between ethnic-based factions.

Shares on Pakistan's main stock market rose, buoyed by increased investor confidence after the market held its own on Monday despite the political concerns, though they eased back after the Peshawar blast, dealers said.