Director of research at JS Global Capital said that "The market is now focusing on how well the coalition government can resolve the remaining issues." 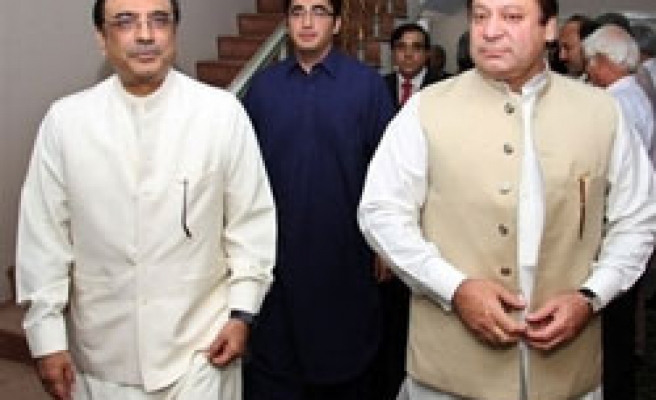 Leaders of Pakistan's coalition government set about tackling pressing economic and security problems on Tuesday as a bomb at a hospital in a northwestern town killed 20 people.

Coalition leaders were also due to discuss a replacement for Pervez Musharraf, the former army chief and key ally of the United States in its campaign "against terrorism", who resigned as president on Monday to avoid impeachment.

Prolonged wrangling over Musharraf's position hurt financial markets in the nuclear-armed country of 165 million people, and raised concern in Washington and elsewhere it distracted from Islamabad's efforts to tackle violent militants.

Musharraf's resignation lifted Pakistan shares and the rupee on Monday and again on Tuesday.

Stocks <.KSE> jumped more than 3 percent in initial trade as investors cheered the easing of political turbulence. The main index later eased but was still 2 percent up.

Investors said Musharraf's resignation removed a hurdle in politics, but markets were now waiting to see if the government could rule effectively.

"The market is now focusing on how well the coalition government can resolve the remaining issues," said Mohammed Sohail, a director of research at JS Global Capital. "Now is a testing time for the coalition parties."

Investors would be looking for concrete steps to restore confidence shattered by the political turmoil, analysts said.

Security is also a huge problem, as the bomb at a hospital in the town of Dera Ismail Khan illustrated. In another part of the northwest, 20 militants were killed in a clash, the government said on Tuesday.

With the coalition partners' preoccupation with Musharraf out of the way, the United States and other allies will be keen to see the government concentrate on fighting militants.

However, divisive questions still hang over Musharraf's future. There was no announcement on Monday on whether he would get immunity from prosecution and be allowed to live freely in Pakistan.

Coalition officials had said Musharraf sought immunity, but he said in his resignation address he was asking for nothing.

One main coalition party, that of former prime minister Nawaz Sharif whom Musharraf ousted in 1999, has insisted he face trial for treason. Bhutto's party says parliament should decide.

Law Minister Farooq H. Naek told reporters there had been no resignation deal with Musharraf.

"He resigned himself and as far as his accountability is concerned, coalition partners will decide," Naek said.

He said coalition leaders would also make a decision on the restoration of judges Musharraf purged last year.

Sharif has been insisting the judges be restored but Bhutto's party has been more wavering, partly because, analysts say, the deposed chief justice might take up challenges to an amnesty from graft charges Musharraf granted party leaders last year.

Newspapers said coalition leaders must settle on a joint candidate for president and avoid squabbling over the post.

The chairman of the Senate, Mohammadmian Soomro, will be acting president until a new one is elected within 30 days.

Traditionally, Pakistan's president has been a figurehead, although under Musharraf the office was much more powerful.