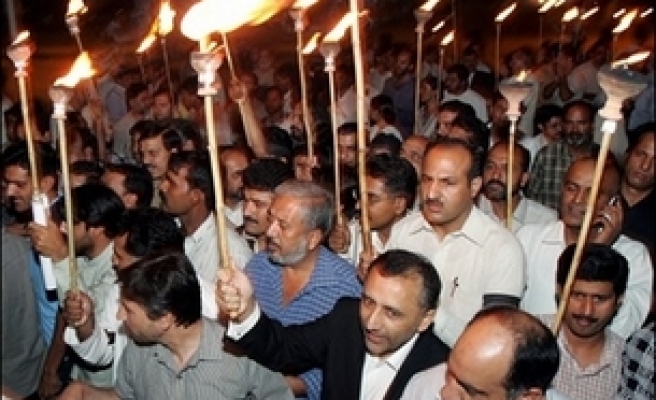 The government, facing a growing opposition campaign since President Pervez Musharraf tried to dismiss the country's top judge in March, said some activists had been detained in the interests of law and order.

"Authorities have launched a massive crackdown against our activists and more than 200 workers have been arrested in Lahore alone," said Shah Mehmood Qureshi, a provincial leader of former prime minister Benazir Bhutto's Pakistan People's Party (PPP).

Musharraf, who is also army chief, suspended Chief Justice Iftikhar Chaudhry over unspecified misconduct on March 9 but the move outraged lawyers and the opposition and has blown up into the biggest challenge to Musharraf since he took power in 1999.

The PPP is planning a day of protests in Punjab province, of which Lahore is capital, on Thursday in support of Chaudhry and the media, which is facing increasing government curbs.

Qureshi said the protests would go ahead despite the detentions.

An Interior Ministry spokesman said some people had been detained this week.

"Some arrests have been made in Punjab where the government feels they were necessary to maintain law and order," spokesman Javed Iqbal Cheema told reporters.

About 40 people were killed in Karachi this month when government supporters clashed with opposition rivals as Chaudhry attempted to meet lawyers in the city.

An official of an opposition alliance of religious parties said some of its activists had also been arrested in Punjab although he did not give a figure.

Separately, a senior information department official in North West Frontier Province was shot dead as he walked to work in the city of Peshawar on Tuesday.