The Pakistani government authorized paramilitary troops on Sunday to shoot anyone involved in serious violence in Karachi, where 37 people have been killed over the past two days, an official said. 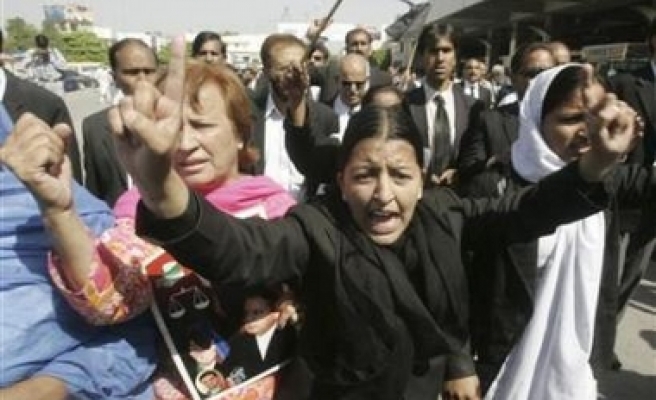 The Pakistani government authorized paramilitary troops on Sunday to shoot anyone involved in serious violence in Karachi, where 37 people have been killed over the past two days, an official said.

On Saturday, 34 people were killed and more than 130 wounded in the country's worst political street violence in two decades, sparked when Pakistan's suspended top judge tried to meet supporters in the southern city.
Violence between pro-government and opposition activists eased on Sunday but three people were killed in separate incidents and protesters set fire to several shops and cars.

Government attempts to remove Chief Justice Iftikhar Chaudhry over unspecified accusations of misconduct on March 9 have outraged the judiciary and the opposition.

The judicial crisis has snowballed into a campaign against President Pervez Musharraf and is the most serious challenge to the authority of the president, who is also army chief, since he seized power in 1999.

"We have increased the presence of Rangers in the city and have told them to arrest or shoot anyone involved in violence and riots threatening life or property," Interior Secretary Syed Kamal Shah told Reuters, referring to a paramilitary force.

"The events of yesterday were very serious and violent. The whole city was paralyzed and many precious lives lost," he said. "We don't want a repeat."

Two political activists, one from an opposition party and one from the pro-government Muttahida Qaumi Movement (MQM), which runs Karachi, were killed on Sunday. The body of a third man, shot in the head, was found in a volatile neighborhood.

Chaudhry, who denies wrongdoing and has refused to resign, flew into Karachi on Saturday, hoping to meet his supporters. But the violence prevented him from leaving the airport.

Musharraf condemned the clashes and criticized Chaudhry for ignoring a government appeal not to go to the volatile city.

In a speech to tens of thousands of supporters in Islamabad on Saturday, Musharraf ruled out a state of emergency.

He said elections due this year -- first a presidential election followed by a general election -- would be on time.

Mourners at the funeral of two members of an opposition religious alliance shouted anti-Musharraf slogans and called for an Islamic revolution as the bodies, draped in party flags, were carried away for burial.

Most of those killed were members of the Benazir Bhutto's Pakistan People's Party (PPP) and the opposition Awami National Party (ANP), which represents ethnic Pashtuns..

Lawyers are due to boycott courts on Monday and the Islamist alliance has called for a nationwide protest. Last Mod: 13 Mayıs 2007, 19:22
Add Comment