Hundreds of women wearing all-covering burqas protested in front of Pakistan’s parliament on Wednesday against Britain’s award of a knighthood to Salman Rushdie. 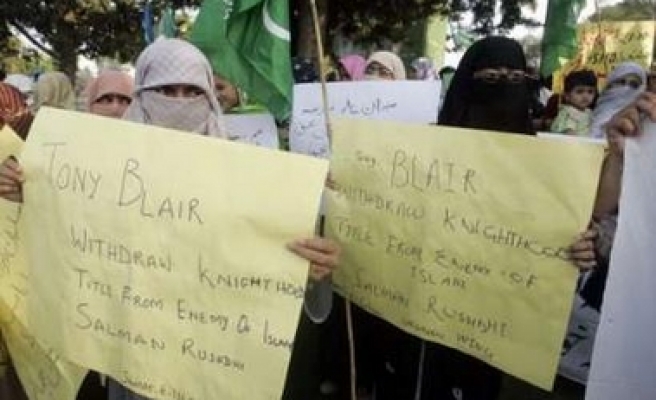 Hundreds of women wearing all-covering burqas protested in front of Pakistan’s parliament on Wednesday against Britain’s award of a knighthood to Salman Rushdie.

The demonstrators blocked the road in front of the parliament building in the heart of Islamabad and listened to speeches delivered through loudhailers by female and bearded mullahs.

‘He is not a famous writer, why has he been given such a rare title? This is really a move against Muslims,’ said Samia Raheel Qazi, an MP and head of the women’s wing of the Jamaat-e-Islami party.

In the southern city of Karachi some 300 Islamic party supporters again torched an effigy of Rushdie, whose book ‘The Satanic Verses’ earned him a death sentence from Iran’s clerical leadership in 1989.

They chanted ‘Death to Rushdie’ and ‘Down with the Queen, down with Britain’ and demanded that Pakistan sever diplomatic ties with London.

Two other smaller protests were held in the city at which they also burned dummies representing the Indian-born writer.

Earlier more than 150 traders gathered in the city’s busy commercial district where they burned a British flag in protest at the award to the ‘hated’ Rushdie.

‘Britain has tried to ignite the controversy of the cursed author Rushdie after more than a decade,’ said the leader of a local traders’ body, Akhtar Butt. ‘It’s a deliberate attempt to provoke Muslims.’

Another rally attended by more than 100 students from religious schools in Multan condemned the award and torched an effigy of Rushdie in protest.

‘By giving the title of ‘Sir’ to Rushdie, Britain has put the award into disrepute,’ said Hidayatullah Pasroori, a local leader of the Islamic party Jamiat Ulema Pakistan.

The hardline Jamiat Ulema Islam party staged a separate rally in the city against the award.

‘We condemn the British government for awarding the title to a blasphemer. They have tried to deliberately hurt our feelings,’ local party leader Maulana Abdul Rauf said.

Pakistan said it had summoned British High Commissioner Robert Brinkley to its foreign office on Tuesday to lodge a complaint and to receive copies of resolutions against the award which were passed by the Pakistani parliament.