Pakistanis hailed Friday, April 27, a court's ruling that re-opened the offices of a notable Islamic charity, which was closed down by the government on terror finance claims, saying the verdict has done justice to thousands of widows and orphans targeted 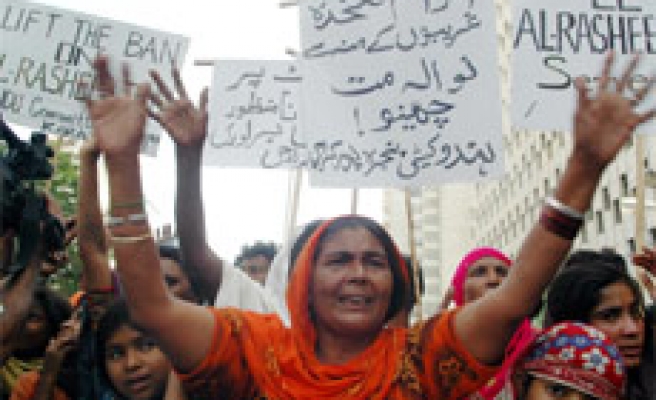 "This is the result of the prayers of thousands of widows and orphans, who had been deprived of the financial and educational support provided by us due to a ban on our relief activities," charity's spokesman Maualna Altaf Hussein told IslamOnline.net.

Altaf said the all charity staff all over the country have been urged to work in full swing and resume aid efforts.

"We are going to resume our operation with renewed vigor, especially in the earthquake-hit areas (of Azad Kashmir) which was suspended due to closure of our offices," Altaf added.

"This is a no doubt a great news for thousands of poor and deserving people, who will get relief by the court’s verdict."

The Pakistani government closed down some 28 offices of the charity, including over a dozen in the southern province of Sindh, citing United Nations tips that it was channeling funds to Taliban and Al-Qaeda militants.

Al-Rasheed Trust was placed on the UN watch list in 2001, which requires member states to freeze assets of organizations linked to terrorism.

The Pakistani government had frozen the accounts of Al-Rasheed the after 9/11 attacks on the United States. However, a court in 2003 declared the move illegal.

The trust’s chairman, Muhammad Sulieman, had challenged the new closure in the Sindh High Court, which reversed the government closure and ordered the charity re-open Thursday, April 26.

The re-opening was also hailed by Pakistani scholars and activists, who said the government had bowed in to foreign pressures.

The central leader of six-party religious alliance, the Muttehida Majlis-e-Amal (MMA), Asadullah Bhutto, called the verdict a victory for justice.

"Al-Rasheed trust is a charity organization, which is known for its relief activities, but the rulers had banned its activities just to appease their foreign masters," Bhutto told IOL.

"The Sindh High Court has dispensed justice by giving a verdict in its (trust) favor, which will help thousands of needy and poor people in the country," he added.

Rashid Naseem of the Human Rights Network said the verdict will give an impetus to other Islamic charities.

"The court’s judgment has proved that the ban on Al-Rasheed Trust’s activities had no base. It was totally unjust and uncalled," he said.

The court said the closure were based on feeble excuses and groundless claims.

"The court has ordered an immediate opening of all the offices and relief centers of the trust throughout the country," charity's lawyer Manzoor Ahmed Rajput, told IOL.

"The court has instructed the government that such action cannot be taken under the UN rules, and that the government needs to frame its own rules and regulations for such steps," he added.

The court also allowed the trust to retrieve edibles and medicines from its sealed premises for distribution in the earthquake-hit areas of Azad Kashmir under the supervision of the Earthquake Relief and Rehabilitation Authority.

Deputy Attorney-General Akhter Ali Mahmud said the charity cannot distribute aid items on its own because the government was implementing a UN resolution.

Altaf dismissed the government and UN terror finance charge, saying the trust is known for its extensive charity work for all Pakistanis irrespective of their religion, color or race.

"This is purely a charitable organization, which had been established by late Mufti Rasheed Ahmed in the late 1990s. The only and solely purpose of the charity is to serve the humanity irrespective of their religion, language or color," he said.

"When our accounts were frozen by the government in 2001, we moved to the Sindh High Court, which declared the government’s action unlawful as it could not provide any proof against Al-Rasheed Trust regarding its involvement in any terrorist activity," he recalled.

The trust came to the lime light for its relief activities in southern and southeastern Afghanistan during the US invasion of Afghanistan in 2001.

The trust’s relief activities were also highlighted by local and international media in the earthquake-hit areas of Azad Kashmir in October 2005.

"We will continue to serve the humanity. This is true that it is an Islamic charity, but we never care about the religious, political or sectarian affiliation of the needy people," Altaf said.

He cited mass Hindu and Christian demonstrations held nationwide after the closure decision as a case in point.