"When I received the invitation for this event, my eyes caught the line, 'Palestine's Spring Blooms in Anatolia'. Let me tell you that this spring, the Spring of Palestine, has never ended in the heart of Anatolia." 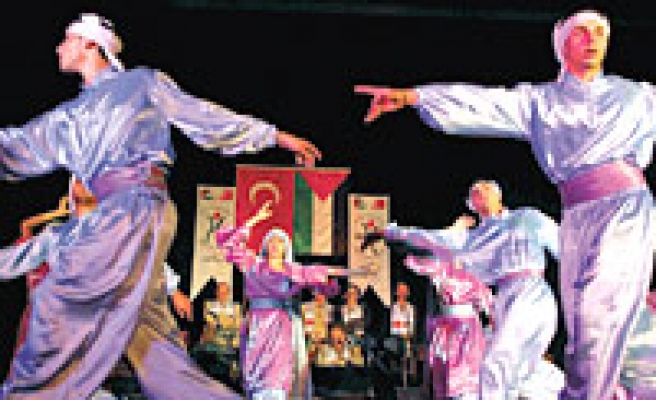 Ankara Mayor Melih Gökçek was addressing about 300 people in the hall of the State Painting and Sculpture Museum. Half of the spectators were of Palestinian origin. You would see Palestinian youngsters in the official garments of the Turkish Army, or of the police forces. The members of the Palestinian diplomatic mission here in Ankara know well that these young boys are the flowers of that Palestinian Spring that blooms in Anatolia.

The Palestine Culture Week was organized by the Embassy of the State of Palestine in Ankara. Ambassador Nabil Marouf was determined from the outset that this cultural event should become a tradition and be repeated every year with growing enthusiasm. "I hope we will organize a Turkish Cultural Week next year in Palestine," he says with his Arabic-accented English. The guttural sounds make his English more passionate and convincing; his "Next year in Palestine" echoes the "Next year in Jerusalem" of the diaspora Jews.

Palestine Culture Week is an event that incorporates photographic exhibitions, music and folk dance. As might be anticipated, the musicians and dancers are not from Palestine. A Palestinian group would face enormous difficulties in reaching Turkey and in returning afterwards. Both the musicians and the dancers are from Lebanon. The Firkat Hanin [Group Yearning] is a group of 12 people, singing and playing Palestinian music. Sanabil al-Aqsa [The Tendrils of Aqsa] is a group of young boys and girls from the refugee camps in Lebanon. The group was established in 1997 and is in Turkey to perform dabka, the Palestinian folk dance.

The show starts with group songs rather reminiscent of military torch songs. At one point, Sahar Sablani, a half-Lebanese, half-Palestinian young lady with dark brown skin and short blonde hair, sang a solo. She is not one of those Palestinian girls with long black hair who love to have the wind comb their tresses. But the sound, the passion, the lament was all Palestinian. Understandably, she sings of the longing of the Palestinian refugees to return to their lands. The lyrics of the song belong to her. "With loud voices return to Palestine," she says. "So that the villagers will feel that I am alive / If I am martyred before my return / I will sing this same song from my grave…"

The words of Sablani reach the hearts of the Palestinian diaspora here in Turkey. They may not feel like foreigners here, but they are aware that the dream to return to Palestine is not to be realized in the near future. How can a people live such a life? Almost a thousand years ago Yehuda Halevi of Spain would sing the same feelings in despair: "My heart is in the East, and I in the uttermost West / How can I find savor in food? How shall it be sweet to me?" But then suddenly you hear Sahar Sablani change the mood of the song: "Layadi Layadi! Hand-in-hand!" And applause follows. "This is my nation," says Sablani. "Our lamenting is a twin of our joy."

The second singer is Haysam Osman. He is in his thirties, which makes him from the second generation of Palestinian refugees. He has never seen Palestine, nor did his parents, probably. One man in the orchestra never saw, and will never see Palestine, even in photographs. He opens Haysam's song with a long violin solo. Muin Ali Yunis lost his sight when he was only three months old. He is originally Lebanese, but his family used to live in Palestine during the Nakba, the Catastrophe of 1948. They returned to the south Lebanese city of Sur, where Muin was born, educated and now lives. He has never seen "the enemy," the Zionist soldiers, but had spoken to one during the 1982 occupation. He cannot define the enemy in visual terms. For him the enemy is a sound, the sound of flying fighter planes from the South. "I can't see things, but I can see light and darkness," he says. "And I can see fear."

Since the enemy is a sound, Muin's resistance is also a vocal one. He uses the violin to recreate the Palestinian resistance fighters in notes and tunes. Haysam joins in with his Haqq al-Awda [The Right of Return]. "Every word of this song has a deep meaning," he says. "The doves travel and travel around, but in the end they return / All those who have left in '48 and in '67 are determined to return / Flag, land, nation and state… This is freedom for us. / Old, young, boys, girls from East, West, North and South, all will return home…" At this point the drum joins in. For those who know the geography of Palestine, the drum beats not for Haysam's song, but to give a marching rhythm for the returning Palestinian. Note-by-note Haysam reaches the end of his song, step-by-step the Palestinians return to their lands…

Muin also returns to Palestine. Had he ever dreamt of it? No, but when he reconstructs the memories of Palestine he heard from his parents, he draws a green Palestine. Green forests, green valleys and beautiful children playing and singing… The people of those green lands are a humble, peaceful people. That is all he can make up of the Palestine he longs for.

Haysam finishes his imaginary march back to Palestine and leaves the microphone to Muhammad Aga. The Aga family is a large Turkish family from Palestine. So Muhammad feels himself at home. This gives him the incentive to play with the words of a famous song that calls on Abu Ammar -- Yasser Arafat. The song originally praises Abu Ammar as the gatherer of the dispersed Palestinian people. But Muhammad prefers to refer to Turkey with the same sentiments. "Ya Turkiyya!" he starts. "O Turkey! You have brought our people together. You have given us consciousness of brotherhood and love. You have gathered different groups under one umbrella. O my brother! Come, come hand-in-hand!" Here Muhammad turns to Abu Ammar. "Just like Abu Ammar wanted us to be. Hand-in-hand!" Muhammad didn't speak of his hopes for Turkey's becoming the "old Turkey" once again and bringing the dispersed Arab nation under its leadership, but he does later.

Songs follow songs, joy follows lamentation, applause follows sad "Ya baa"s. Then comes in the Sanabil al-Aqsa. Four girls are followed by four boys. The choreographer, Ilham Shuli, is a Lebanese lady. "Dabka is a dance of Palestine, Lebanon, Jordan and Syria," she explains. "The theme of dabka is taken from ancient Palestinian wedding and courtship dances. Dabka is our national dance. It does not have political symbols, but it has a political meaning. It tells the happy, joyful lifestyle of the Palestinian people before the Zionists came."

Sanabil al-Aqsa performs several different dances. Dabka Dahiyye is about a wedding occasion when young boys are looking for beautiful girls to chat with. Girls, of course, behave coquettishly and want the boys to show their courage and strength. The competition between the boys reaches the point that swords are unsheathed and a show of strength begins. "This is not something made up," says Ilham Shuli. "In the past marriages were arranged at wedding ceremonies. Boys and girls would dance the dabka and boys would sing improvised songs about a girl who finds favor in their eyes. The girl would respond if she was interested in chatting, and you would know the next couple in the village." Much more sophisticated than throwing a bride's bouquet!

In another dance called Zaytoun wa Bayan al-Nasr (Olives and Declaration of Success) the Sanabil al-Aqsa tells the story of a marketplace where boys ask for the hand of a girl in marriage. The movements are taken from agricultural activities; hands sprinkle, plough and harvest and feet work on the earth. In the market harvested fruits change hands, and girls offer water to the young boys. Here emerges the utopian side of the Palestinian return myth. Haysam Osman's Haqq al-Awda finishes with these utopian lines: "The fisherman returns to fishing; the farmer returns to farming…"

PROGRAM
Palestine Culture Week will continue in Ankara, Konya and İstanbul in the coming days at the following venues.