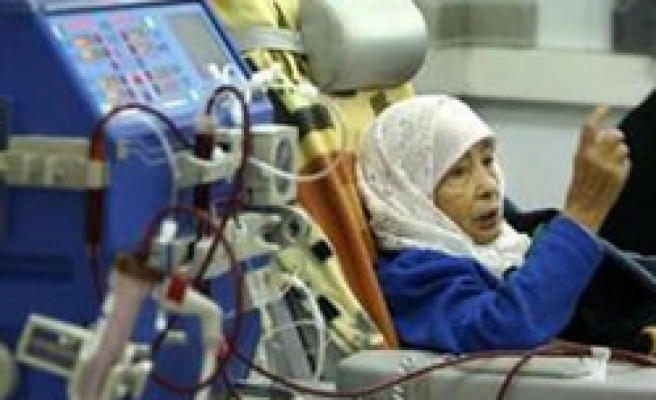 Physicians for Human Rights documented the cases of 32 Palestinians, including some with terminal illnesses, who said they were denied entry into Israel for medical examinations after refusing security agents' pressures at the border to spy on Gaza fighters.

The report said the number of Gazans seeking care in Israel has more than doubled since the siege Israel imposed after Hamas seized power in Gaza last year. An Israeli-led blokage of the coastal enclave since then has led to a deterioration in Gaza's health services and its main crossing with Egypt has been largely closed.

But applicants for treatment in Israel were being turned away in proportionately greater numbers by security agents at the Erez crossing between Gaza and Israel, the report said.

The report includes 11 of some 30 sworn testimonies taken in recent months which describe security agents interrogating patients and appearing to make their entry from Gaza into Israel conditional on their recruitment as informers.

The patients describe being led to underground rooms at the Erez pedestrian crossing, where they are questioned for hours about neighbours and relatives.

"You have cancer, and it will soon spread to your brain, as long as you don't help us," security agents told one man, according to testimony provided to Physicians for Human Rights.

After around eight hours of interrogation the man was given permission to enter but by then had missed his appointment at an Israeli hospital. He had to reschedule and was not allowed to leave until two months later.

Another man, a farmer who had been wounded by a tank shell in 2006 and given emergency treatment in Israel, was asked similar questions in January when he received a permit to return to the hospital for a follow-up operation.

"They wanted information about the area where I'm from, about my relatives and neighbours. They said if I did not give them the information they would not let me leave," he said. He was later sent back to Gaza.

The rights group documented cases in which patients were summoned for questioning or to receive exit permits only to be jailed in Israel and others where patients did not come to the crossing for fear of being arrested.

Once an agent "has established control over a patient, permitting medical treatment is explicitly or implicitly made contingent upon collaboration," said the report.

Ehab al-Ghsain, spokesman for the Hamas-controlled Interior Ministry in the Gaza Strip, said Israel is exploiting Palestinians in need of urgent care.

"It is not a new method for the Zionist occupation," he said, referring to Israel. "We warn citizens not to succumb to these temptations and to report to the authorities."