Palestinian PM calls for outside intervention to stop Israeli attacks

Palestinian Prime Minister Ismail Haniya on Monday appealed to the United Nations and the Arab League to intervene to stop stepped-Israeli attacks on the Palestinian people. 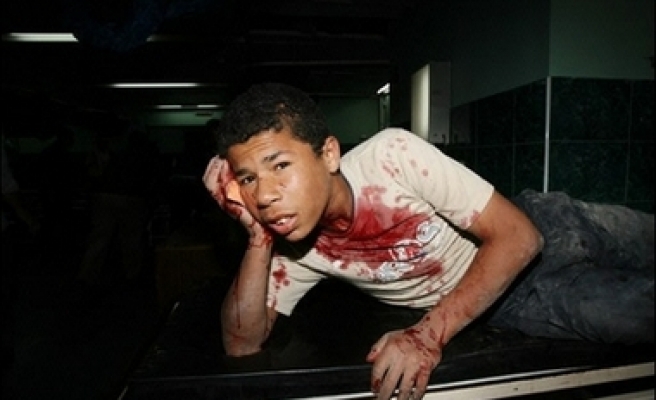 Palestinian Prime Minister Ismail Haniya on Monday appealed to the United Nations and the Arab League to intervene to stop stepped-Israeli attacks on the Palestinian people.

Haniya, in a statement, urged the UN, the league and the international community to exert pressure on Tel Aviv to stop the escalating aggression and "face the Israeli arrogance." His appeal came after the Israeli Air Force stepped up attacks on suspected bases of Palestinian groups.

He said "the Israeli massacres will not terrorize our people," and urged warring Palestinian fations to close ranks in the face of the escalating attacks.

His call came after Israeli warplanes carried out a series of strikes killing 13 Palestinians.

Israel says it will step up the air strikes in retaliation for recurring missile attacks on southern Israel.

Palestinian sources in the city said that Israeli forces burst into the Nablus television and radio stations, carrying out inspections and confiscation of equipment, computer and the archive.

The sources added that the Israeli forces detained workers in both stations for several hours.

Israeli warplanes staged new strikes over the past hours targeting Palestinian activists in Gaza Strip killing one person and wounding at least 10 others including members of Hamas group.

Medical sources said five Palestinians, including a Hamas activist, were wounded in a raid that targeted a cement factory in the east of Gaza Strip. Sheikh Maher Karim, an activist of the organization, and four people who were at the factory, were wounded when a rocket fired by the attacking aircraft hit it.

Dr. Mohammad Al-Saqqa, the director of Al-Shifa Hospital, said Karim's condition was critical and was placed in the intensive care ward.

Al-Aqsa radio station, close to Hamas, reported that Hamada Al-Fayyoumi, 20, was killed in the strike that also extensively damaged the factory.

In Al-Nusairat refugee camp, located in the center of Gaza Strip, a rocket fired by an overlfying Israeli warplane crashed into the house of Naaman Abu Muhadi, an activist of the Islamic Jihad organization, partially destroying the house, witnesses said. No one was hurt in the strike.

In Al-Zaitoun district in the east of Gaza city, at least five Palestinians were wounded in an Israeli air attack, according to local radio stations. They said an air-to-surface rocket crashed close to a group of people wounding five.

Sound of a rumbling blast echoed across Gaza city over the night, but it was not clear what caused it, while Israeli warplanes staged intensive flights.

Latest reports from Israel indicated that the authorities shelved for now a plan to wage a major wide-scale military offensive on Gaza Strip in retaliation for recurring missile attacks targeting the south of Israel.

"We will kill Khaled Meshaal"

Israel has said it will kill Khaled Meshaal, the exiled Hamas political leader "at the first opportunity".

The threat to kill Meshaal and other leaders of the Palestinian resistance group came as Israel continued with his offensive in Gaza, bombing a Hamas stronghold on Monday in an escalating air attack.

Avi Dichter, the Israeli public security minister, told army radio on Monday: "He [Khaled Meshaal] is a more than legitimate target and I am convinced that at the first opportunity we will rid ourselves of him, despite the difficulty of the task".

Another Israeli minister said all Hamas leaders should be killed with a view to end cross-border rockets being fired into Israel.

Binyamin Ben-Eliezer, the national infrastructure minister, said on Israel Radio on Monday: "I don't distinguish between those who carry out the [rocket] attacks and those who give the orders. I say we have to put them all in the crosshairs".

Asked if Ismail Haniya, the Palestinian prime minister, could be a target, Dichter said: "If Haniya is part of those who give the orders to carry out attacks, that will make him a legitimate target."

Meshaal, who lives in exile in Syria, escaped a Mossad assassination attempt in Amman in 1997.

Two Israel agents botched an attempt to poison him then.

"He is not safe anywhere, neither in Damascus or elsewhere," Dichter said. "And he knows this perfectly well."

"He is linked to the group that has at its heart terrorism against us, but I am not aware if he is among those who directly give the orders" for rocket attacks, Dichter said.