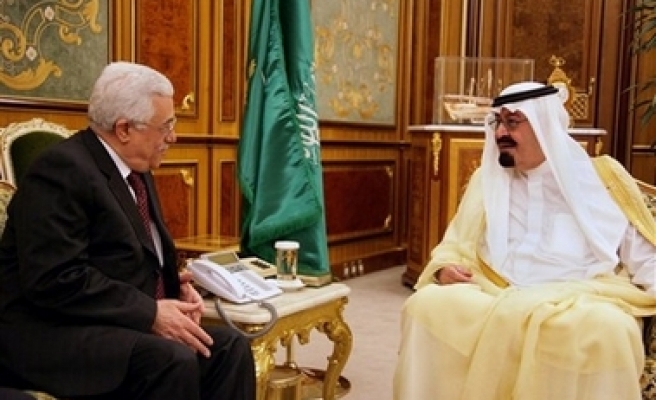 The meeting in the Saudi capital, Riyadh, came a day after the Palestinian leader from the Fatah movement met with Khaled Mashaal, the political leader of the group Hamas, in Cairo.

Their talks were the first since their blocs formed a coalition government in March under Saudi Arabian mediation.

During Sunday's meeting, Abbas updated the Saudi king on the deteriorating security situation in the Gaza Strip, a Palestinian official in Riyadh said on condition of anonymity because he was not authorized to speak to the media.

Saudi Arabia has no formal relations with Israel but has pushed recently for a peace deal between the Jewish state and the Arab world.

The Palestinian official said the two Arab leaders discussed "how to re-establish security (in Gaza) and reactivate the cease-fire."

Meanwhile, Mashaal demanded in an interview published Monday that Israel release top Palestinian leaders in return for a captured soldier.

Mashaal told the Palestinian newspaper Al-Ayam that Hamas intended to demand prominent Palestinian leaders, including Marwan Barghouti, a popular leader of the Fatah, in exchange for the soldier.

Israel has said it will not release Barghouti.

A list of Palestinian prisoners the group wants freed in the first stage was handed over to Israel by Egyptian mediators, but the group has not received a response, Mashaal said. Israeli Prime Minister Ehud Olmert has said in public that the list is not acceptable.

Mashaal told the paper that the captive soldier was being treated humanely.