Rival Palestinian factions have agreed a new truce after days of deadly clashes in the Gaza Strip. 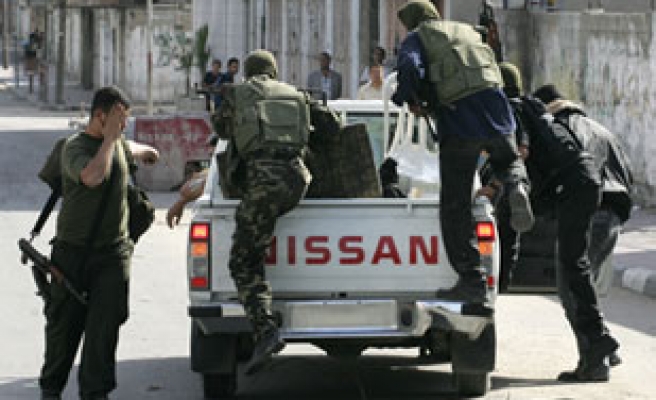 "Armed men will leave [their positions in] buildings and streets, will remove road blocks and release hostages on both sides," Ghazi Hamad, the Palestinian cabinet spokesman, said after a meeting between leaders of the two groups on Saturday.

"The two groups have begun ordering their men to implement immediately," he added.

The deal, brokered by Egyptian mediators, was the fifth since the violence began last Sunday. At least 50 people have been killed and dozens wounded since then.

"There isn't a lot of hope or optimism in any announcement among the Palestnian public as a lot of similar ceasefires have been reached and broken just as quickly," Nour Odeh, Al Jazeera's Gaza correspondent, said.


A convoy carrying a top aide to Abbas's intelligence chief in the Gaza Strip came under fire shortly after the agreement was signed but Mohammad al-Masri of Fatah was reportedly unharmed.

Israeli attacks on targets in the Gaza Strip continued on Saturday. One Palestinian was killed and five others wounded in latest air strike in the town of Beit Hanoun in the north of the territory.

The Israeli army confirmed it carried out an air raid against "three members of a Qassam rocket-launching cell that had just fired a rocket towards Israel."

After the deal was signed Tawfiq Abu Khoussa, a senior Fatah leader, said: "It would be a stigma if internal violence continued amid such Israeli aggression."

Earlier, Israel said its aircraft had struck two Hamas weapons' depots in the Gaza Strip. Palestinians said the targets were metal foundries with no connection to Hamas.

Saturday's attacks were part of Israel's bombing campaign against Hamas that has killed at least 14 Palestinians since Wednesday.

Israel also threatened on Saturday to go after sensitive Hamas targets in an effort to halt rocket fire from Gaza.

Amir Peretz, the Israeli defence minister, told Israel Radio that Tel Aviv would leave open the possibility of strikes against the group's political and military leaders.

"The Palestinians need to understand that Hamas is leading them into disaster, a real disaster," he said. "It is our intention to act against Hamas."

Asked whether Ahmed Jaberi, the head of Hamas' military wing, and Ismail Haniya, the Palestinian prime minister, could also be targets, Peretz said he would not rule out any action that "makes it clear to everyone that we don't intent to allow anyone to harm Israeli citizens."

The army said at least one rocket fired from Gaza landed in Israeli territory on Saturday morning, causing damage to a home but no injuries.

Later, a rocket-propelled grenade fired by fighters from the armed wing of Hamas struck an Israeli army bulldozer just inside Gaza's northern border with Israel, the group said.

Israeli ambulances were seen entering Gaza near the site of the reported attack.


In response to the intense Israeli air assault, Hamas's armed wing has threatened to resume suicide bombings in Israel. A Hamas bomber last struck in Israel in 2004.

"If they will resume suicide bombings, we will retaliate with a siege on Gaza," a senior Israeli official told Reuters on condition of anonymity.