Palestinians and Israelis are demonstrating in the West Bank to mark the anniversary of the start of the 1967 Middle East war and to demand an immediate end to Israel's occupation of Palestinian land. 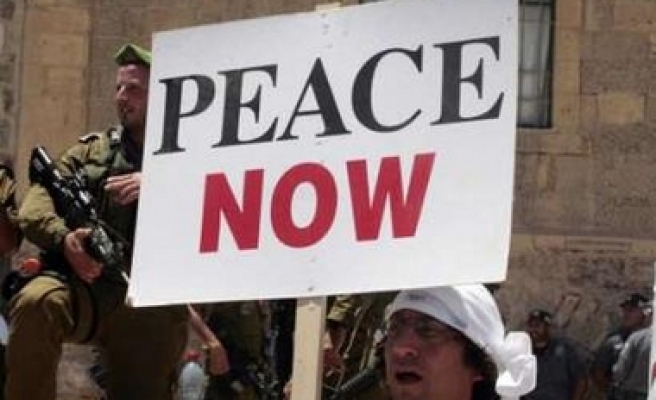 Palestinians and Israelis are demonstrating in the West Bank to mark the anniversary of the start of the 1967 Middle East war and to demand an immediate end to Israel's occupation of Palestinian land.

And in East Jerusalem on Tuesday, Israeli police shut down a Palestinian conference to mark 40 years since Israel captured the sector of the city.

Ismail Haniya, the Palestinian prime minister, marking the date, said: "There will be no solution to the current political crisis without lifting the inhuman siege.

"Forty years has passed since 1967 and Israel has continued its occupation of the land, but not the Palestinian people."

Palestinians gathered on Tuesday in Nablus, and in Ramallah's main square, down the road from an Israeli military checkpoint at the entrance to the main city in the occupied West Bank, for a rally to mark the naksa (setback) of 1967.

The 1967 war, which began on June 5 with Israeli air raids that destroyed the bulk of the Egyptian air force, ended with Israel in control of the West Bank - including Arab East Jerusalem - the Gaza Strip, Golan Heights and Sinai desert.

In the West Bank city of Hebron, about 200 Israeli demonstrators gathered to mark the anniversary, urging the Israeli government to remove all Jewish settlers from the biblical city.

At Tuesday's protest, near the Tomb of the Patriarchs, demonstrators held signs calling for the removal of the settlers. They faced off against 30 counter protesters nearby, who carried signs calling them "traitors".

Local Palestinians peered out from the windows at the protesters, while dozens of soldiers - including troops on a nearby rooftop - stood guard.

Doron Narkiss, 52, a teacher from Tel Aviv, said: "I'm here to protest the occupation in one of the most violent places in the territories. I want my name down as one of the people who are opposed."

David Wilder, a spokesman for the Hebron settlers, called the protest "incitement".

He said: "How can Jews support those trying to kill us?"

Walid Batrawi, Al Jazeera's correspondent in Ramallah, said rallies will continue across the West Bank for the rest of the month, primarily in Ramallah and Nablus, and culminating on June 28 with the anniversary of the annexation of East Jerusalem into Israel.

Marking the 40th anniversary of what he called the Arabs' "great defeat", Mahmoud Abbas, the Palestinian president, assured his people on Tuesday that statehood was within reach.

However, new fighting between Abbas's Fatah movement and the governing Hamas, as well as the president's failure to secure a ceasefire between Palestinian fighters and Israel, highlighted some of the obstacles on the road to an elusive peace.

Abbas, in a televised speech, said: "On the internal front, the cause of everybody's concern is what is called the security chaos, or more precisely, standing on the brink of a civil war."

In the Gaza Strip, Fatah and Hamas forces fought a three-hour gun battle near the Karni commercial crossing, the most serious flare-up in factional fighting in two weeks. At least one member of Abbas's Presidential Guard was injured.

The Palestinian president said he had spent hundreds of negotiating hours trying to halt the bloodshed and "realising that what is equal to or even worse than occupation is internal fighting".

In the West Bank on Tuesday, a 14-year-old Palestinian was shot and wounded in the stomach by Israeli soldiers during an operation in the town of Jenin, witnesses said. Medical workers said the boy was shot when soldiers fired at stone-throwers.

Israel's military confirmed an operation was under way in Jenin. It gave no further information.

Israeli tanks and infantry pulled out of the southern Gaza Strip early on Tuesday, one day after launching the largest ground operation in the area in months.

The troops entered the sparsely populated area on Monday, pushing more than 1.5km into Gaza.

No major fighting was reported.

Omar Jarghoun, a 40-year-old-farmer in the village of Muamer, said troops took over his home early on Monday to use as a monitoring position, poking holes in his walls for snipers and destroying his wooden doors and windows.

Jarghoun said he fled the house before the troops moved in.

"We ran when we knew they were coming. We just left the house for them," he said.