Israeli troops have killed two Palestinian fighters in the West Bank town of Nablus, hours after at least six Palestinians were killed in raids in Gaza. 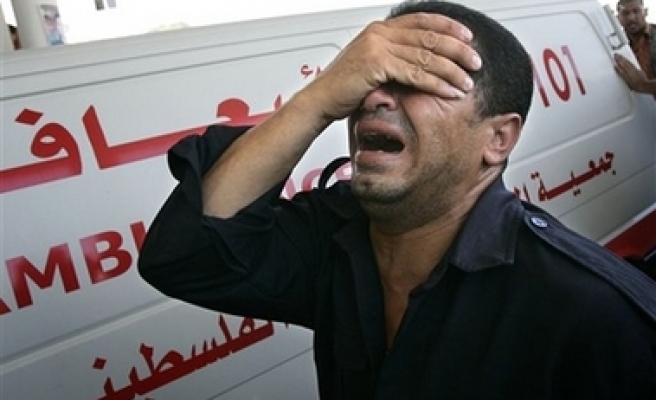 The raids on Sunday and Saturday were the worst flare-up in Israeli-Palestinian fighting in months.

Fadel Nur, 23, and Amin Lubadi, 25, both members of the Al Aqsa Martyrs Brigades were killed by Israeli fire early on Sunday.

Palestinian security sources said Israeli troops killed them after surrounding the house in which they were hiding.

The Israeli army had no immediate comment on the Nablus raid.

Islamic Jihad said a 45-year-old man was killed in the missile fired by an Israeli jet fighter on Saturday.

The Palestinian group described him as a civilian but said he was riding in a car with two fighters, who were seriously wounded.

The Israeli army said the air strike, only the second in Gaza since a November truce, hit fighters who had fired makeshift rockets at the border town of Sderot.

One of the rockets hit a house in the Israeli border town of Sderot but did not cause any injuries, Israeli police said.

In a statement on Saturday, they said the attack was to avenge the deaths of Palestinian fighters shot dead earlier in the day in a West Bank city.

A Palestinian security source said the three fighters were killed by an Israeli undercover unit while driving down a street in Jenin.

Palestinian officials said a 17-year-old girl, identified as Bushra Wahash, was shot by Israeli gunfire as she peered out the window of her home.

The Israeli army said it was investigating the report.

A Palestinian policeman was also shot dead by Israeli troops operating in a village near Jenin, a Palestinian security source said.Israeli forces had raided Kafr Dan looking for people it described as "wanted activists", Al Jazeera's correspondent reported. Residents told Al Jazeera that Israeli snipers positioned on the occupied buildings opened fire at Abed. His family said he was in the house at the time and unarmed. He was shot twice and died immediately, they said. Israeli forces continued to carry out search operations in Kafr Dan and detained at least 10 people.

In a separate incident on Saturday, three explosive devices were set off in the American International School in Gaza City, causing damage but no injuries, Palestinian security sources and witnesses said.

Rebhi Salem, the school's director, said: "A large number of masked gunmen attacked the school at dawn. "They poured petrol all around and blew up several explosive devices and destroyed some of the premises."

Salem quoted the armed men as saying that they were part of an al-Qaeda organisation operating in Gaza.

The school is a private institution that is part of an association of "American Schools" in the Middle East.

The curriculum stresses English as well as Arabic studies. None of the teachers are American and a US embassy official said the school has no connection to the US government.

Two members of staff were briefly abducted from the school in March 2006.