Some 1,000 Palestinians took to the Gaza streets on Wednesday, June 13, to demand an end to the raging factional fighting plaguing the strip. 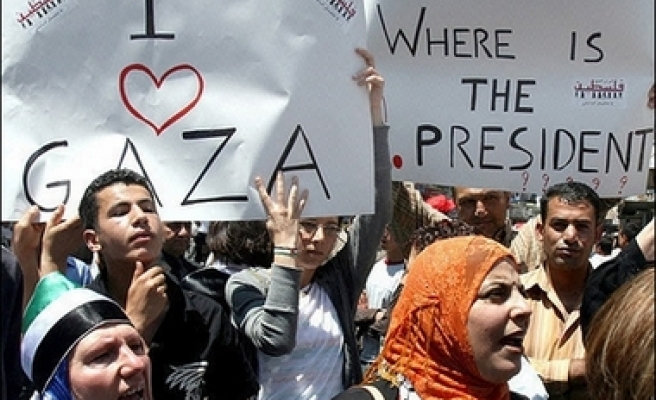 For many of the Gaza Strip's beleaguered 1.5 million inhabitants the explosive situation in the impoverished coastal region is no less than a civil war, clear and simple.

"This is a genocide. Gaza is over," Mohammad Hassan, 35, told IslamOnline.net on Wednesday, June 13.

"We are living in Iraq, not Gaza," said a panicked Amar, a father of six, unable to believe his eyes.

"Gunmen are killing each others. Deformed bodies are scattered across the streets," he added.

At least 27 people were killed in the latest violence raising the death toll since the current surge of bloodshed began on Saturday to 75, hospital officials said.

Over 600 Palestinians have been killed in factional fighting since Hamas came to power in March 2006 after defeating Fatah in a parliamentary election.

Some 1,000 Palestinians took to the Gaza streets on Wednesday, June 13, to demand an end to the raging factional fighting plaguing the strip.

Waving Palestinian flags and chanting "stop the killing", they marched through Gaza.

During the march, called for by the Gaza-based Egyptian security delegation, the protestors twice came under fire from armed gunmen, killing two of them and wounded 14 others.

It was not immediately clear who shot at the demonstrators.

In Khan Younis, dozens of Palestinians also marched across the city, calling on the warring groups to lay down their arms.

Forty Palestinian policemen loyal to Fatah crossed the border into Egypt to flee the raging infighting.

Around 10 Palestinian civilians also entered Egypt after making a hole in the concrete wall dividing the Palestinian and Egyptian sides of the divided border town of Rafah.

Palestinian President Mahmoud Abbas said "what is happening in Gaza is madness" and repeated a call for a truce.

He spoke by phone to exiled Hamas political chief Khaled Meshaal to explore ways of ending the factional fighting which threatens their unity cabinet.

Fatah has suspended its participation in the government and threatened to pull out unless the infighting ceased.

The European Union said it would consider the deployment of international troops in Gaza to end the deadly fighting as suggested by Israeli Premier Ehud Olmert.

Israel had in the past resisted Palestinian calls for peacekeepers in Gaza and the occupied West Bank, saying their deployment would interfere with its security measures.