The U.S. strengthened its offer of support for President Mahmoud Abbas on Saturday, telling him an international aid embargo against the Palestinians would end as soon as he forms a new government without Hamas, aides to Abbas and a Western diplomat said. 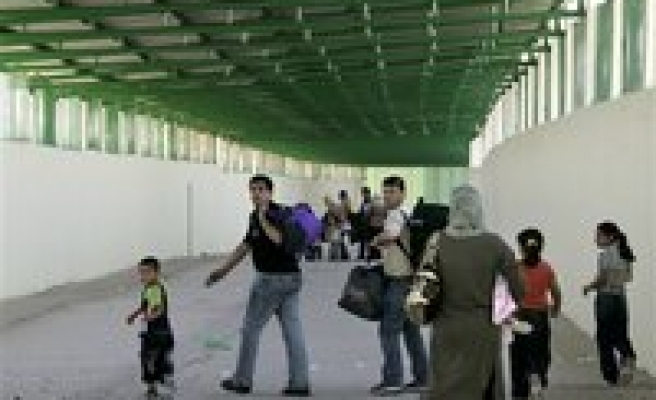 The State Department said only that U.S. officials were studying how to bolster Abbas' administration given the upheaval in the Palestinian territories.
Hundreds of Fatah gunmen stormed Hamas-controlled institutions across the West Bank, seeking revenge for the Islamic group's takeover of the Gaza Strip.

The Hamas-controlled Gaza Strip and the Fatah-controlled West Bank have effectively become separate political entities, endangering the Palestinian dream of forming an independent state in the two territories.

In the West Bank, Abbas' newly appointed Palestinian prime minister, Salam Fayyad, moved forward with plans to form an emergency government. Officials close to Abbas said the government would also include members from Gaza, underscoring Abbas' claim to lead all Palestinians. Hamas, which now claims its own government in Gaza, called the move illegal.

Abbas aide Yasser Abed Rabbo said the new government would be sworn in by Sunday. He also rejected negotiations with Hamas: "There will be no dialogue with killers who carried out field executions in Gaza."

Abbas also rejected a plea from the Arab League to meet with Hamas' exiled leader, Khaled Mashaal, an Abbas aide said. He spoke on condition of anonymity because he was not authorized to speak to the media.

The international community, both in the Arab world and the West, have sided with Abbas in the dispute.In a major boost for Abbas, the U.S. consul-general in Jerusalem, Jacob Walles, said Washington would end 15 months of sanctions once the new Palestinian government is formed, aides to Abbas said, speaking on condition of anonymity because the meeting was closed.

The sanctions were imposed after Hamas, which the U.S. has branded a terrorist group, was elected in January 2006. Hamas and Fatah have been locked in a power struggle since then, especially over which group would control security forces.

A Western diplomat, speaking on condition of anonymity, said the U.S. was expected to announce at the beginning of the week that it will fully engage with the new Abbas government. All restrictions will be lifted, including those on bank transfers, the official said.

In Washington, Sean McCormack, State Department spokesman, said the Bush administration was examining its options for providing support to Abbas, but added that "I can't offer any specifics for you at this point."

He described Fayyad, Abbas' new prime minister, as "a person that the international community has long experience with, has great confidence in."

Since seizing control of Gaza on Thursday, Hamas has tried to impose law and order in the area - in part due to fears of retribution in the West Bank. Saturday's attacks on Hamas targets were the most serious so far.

In Ramallah and Nablus, hundreds of Fatah gunmen took over the Palestinian parliament and other Hamas-controlled government offices, and said staffers with ties to Hamas could not return.

At the parliament, several hundred Fatah supporters chanted, "Hamas out," while gunmen climbed on the roof of the building and fired in the air. They also whisked the deputy speaker, a Hamas ally, out of the building, but were prevented from pushing him into a car.

Many government employees tied to Hamas, apparently fearing they would come to harm, never came to work Saturday, the start of the work week in the West Bank.

In Gaza, meanwhile, Hamas forces on Saturday blew up the home of a prominent Fatah family, collected rivals' weapons and deployed hundreds of security men at strategic locations.

"They are going to provide the people with all the security they have lacked in the past few years due to the bad behavior of some corrupt agents," said Abu Hilal, the Hamas spokesman.

With Hamas firmly in control, Gaza City's streets largely returned to normal Saturday. Outdoor markets were alive, and traffic jams clogged the streets - a dramatic contrast to the street battles seen earlier in the week. Still, jittery residents stocked up on flour and other basic supplies in fear of further violence.

Hamas units took up positions at former Fatah security buildings. At the damaged headquarters of the Preventive Security Agency, Hamas said it found the bodies of seven people it claimed were executed by the pro-Fatah force before it was routed.

Despite Hamas' pledges of calm, looting persisted at key Fatah symbols, including the home of Arafat, the founder of Fatah who ruled the Palestinians for 40 years.

Witnesses said gunmen stormed the house early Saturday, taking furniture, including a bed, and three cars. Hamas security forces later arrived and locked the house. The home had been empty since Arafat left Gaza in 2001. He died in 2004. The witnesses declined to be identified, fearing for their safety.

Other targets of looters were former Fatah security buildings and what had been the opulent home of Gaza strongman Mohammed Dahlan. Looters ripped out electric wiring from the wall, and a group of people also burned down the garden outside, witnesses said. Dahlan has fled to the West Bank.

Despite Hamas promises of amnesty, dozens of fearful Fatah supporters converged on the Erez border crossing with Israel in hopes of traveling to the West Bank. One young man shouted "bye, bye, Gaza," and waved as he walked through the covered walkway that leads to the Israeli side.

Israeli government spokesman Shlomo Dror said about 100 people arrived at the checkpoint but said only a small number of "humanitarian cases" were allowed to pass. He said many people were turned back.

At the same time, hundreds of people looted police positions on the Palestinian side of Erez, and at one point .Israeli troops fired in the air to keep the crowd at bay. The looters walked off with furniture and scrap metal.