Paul Wolfowitz's handling of his girlfriend's promotion violated the terms of his contract and constituted a conflict of interest, precipitating a "crisis in the leadership" at the World Bank, a panel has said. 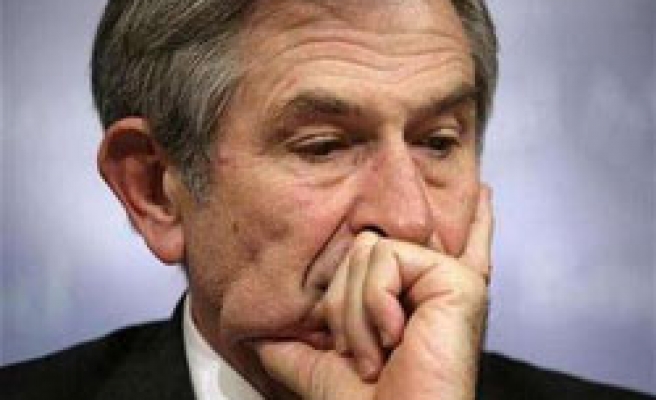 Paul Wolfowitz's handling of his girlfriend's promotion violated the terms of his contract and constituted a conflict of interest, precipitating a "crisis in the leadership" at the World Bank, a panel has said.

It recommended that the bank's board consider whether its president could "provide the leadership needed" to fulfil the bank's mandate.

Wolfowitz described the report as "unfair and unwarranted".

World Bank board sources said the US tried to press the investigating panel to hold off the circulation of its final report for several hours to the bank's full board, which is to meet Wolfowitz in a closed-door session on Tuesday.

The American move appeared to be a bid to quash a growing feeling among most of the board that Wolfowitz could no longer continue as a credible leader, board sources said.

Tony Fratto, a White House spokesman, said the Bush administration "did request a delay" but that it was not an attempt to influence bank member countries.

"We just need the time to ensure that the report is fair and factual and to allow for a proper process for discussions going forward," Fratto said.

The White House showed no sign of yielding in its steadfast support for Wolfowitz and said on Monday he should continue as head of the World Bank.

The panel's report was eventually circulated among the full board, but in paper form and not by email in an apparent bid to avoid it being leaked.

One European board source said there had been an effort on Monday morning by the United States to arrange a conference call for Tuesday among the Group of Seven deputies. It was later cancelled.

A White House official, speaking on condition of anonymity, said the United States was talking to counterparts at various levels in the G7 and other countries about the panel's report.

The official said consideration of the Wolfowitz issue should be split into two matters - whether he violated bank rules and whether he should continue as president of the bank.

"And we think there ought to be a bright line between those two questions," the White House official told Reuters.

The special World Bank panel's report on Monday concluded that Wolfowitz's involvement in the details of the package "went beyond the informal advice" given by the bank's ethics committee and that he "engaged in a de facto conflict of interest".

Under Wolfowitz's contract as well as the code of conduct for board officials, he was required to avoid any conflict of interest, the report said.

In a response to the panel's report, Wolfowitz said: "It is highly unfair and unwarranted to now find that I engaged in a conflict of interest because I relied on the advice of the ethics committee as best I understood it."

Wolfowitz oversaw a promotion and pay rise for his girlfriend, Shaha Riza, a World Bank Middle East analyst who worked for the bank before he took over as president in June 2005.

She was moved to the US state department to avoid a conflict of interest but stayed on the bank's payroll.

The panel concluded that the increase she received "at Mr Wolfowitz's direction was in excess of the range" allowed under bank rules.

Wolfowitz "placed himself in a conflict of interest situation" when he became involved in the terms and details of Riza's assignment and pay package and "he should have withdrawn from any decision-making in the matter," the panel said.

The panel acknowledged, however, that the informal advice provided by the ethics committee "was not a model of clarity".

World Bank employees have been in virtual revolt for weeks over Wolfowitz's interference in the promotion, which only became public when it was leaked in early April and prompted a board investigation.

Members of the board, who will decide Wolfowitz's fate, have discussed a range of disciplinary options.

They could fire him, ask him to resign, report a lack of confidence in his leadership or reprimand him.

Board members have been leaning towards an expression of no confidence or other tough language that would make it difficult, if not impossible, for Wolfowitz to stay on. Last Mod: 15 Mayıs 2007, 10:45
Add Comment