A judge sentenced a shocked and tearful Paris Hilton to 45 days in jail on Friday, ruling that the hotel heiress violated her probation for a previous traffic offense by knowingly driving without a valid license. 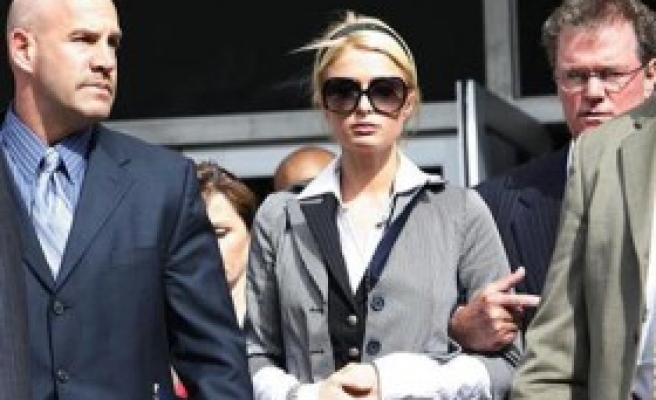 Los Angeles Superior Court Judge Michael Sauer rejected Hilton's defense that she didn't realise her license was suspended and ordered the 26-year-old socialite to report to a county detention facility on June 5.

Hilton wept and her mother, Kathy, yelled at the prosecutor, "You're pathetic," as the packed courtroom cleared.

During the two-hour hearing prosecutors argued that Hilton was thumbing her nose at the court and seeking to be placed above the law, while defense lawyers said she was being singled out for harsh treatment because of her celebrity.

Taking the witness stand in her own defense, the star of the reality TV show "The Simple Life" testified that she was unaware her driving privileges had been completely suspended at the time police stopped her and impounded her car on February 27.

Hilton said her publicist, Elliot Mintz, had told her she was permitted to drive for work-related reasons after the first 30 days of her license suspension late last November, and that she relied on what he had said.

But the judge said he did not believe Hilton, pointing to a notice she had received from a police officer, and had signed, during another traffic stop in January.

He said Hilton had "completely ignored" that notice, which she had carried in her glove box for weeks, and another license suspension notice sent to her office address by the Department of Motor Vehicles that Hilton said she never saw.

"In my opinion, there's not doubt that she knew that her license had been suspended," the judge said. "She doesn't look at her mail, her personal assistant never goes through it either. ... I think she just wanted to disregard everything that was said and continued to drive no matter what."

In a final statement before she was sentenced, Hilton, dressed in a gray waist jacket, white blouse and

black pants, her blond hair tied back in a pony tail, stood before the judge and denied that she had sought to flout the law.

Hilton's lawyer, Howard Weitzman, said he would appeal "to modify the sentence."

"It is clear that she has been selectively targeted for prosecution for who she is," he said outside the courthouse.

City attorney spokesman Nick Velasquez said late Friday that the judge's ruling "sends a clear message that in the city of Los Angeles, no one is above the law."

"She violated the law and appropriate action was taken," he said.

Hilton, 26, pleaded no contest in January to reckless driving stemming from a September 7 arrest in Hollywood. Police said she appeared intoxicated and failed a field sobriety test. She had a blood-alcohol level of .08 percent, the level at which an adult driver is in violation of the law.

She was sentenced to 36 months probation, alcohol education and $1,500 in fines.

Two other traffic stops and failure to enroll in a mandated alcohol education program, are what landed the socialite back in court.

On January 15, Hilton was pulled over by California Highway Patrol. Officers informed her that she was driving on a suspended license and she signed a document acknowledging that she was not to drive, according to papers filed in Superior Court.

Los Angeles County sheriff's deputies stopped Hilton on Feb. 27 and charged her with violating her probation. Police said she was pulled over at about 11 p.m. after authorities saw the car speeding with its headlights off.

Mintz said at the time Hilton wasn't aware her license was suspended. A copy of the document Hilton signed on Jan. 15 was found in the car's glove compartment, court papers say.

Hilton was also required to enroll in an alcohol education program by February 12. As of April 17, she had not enrolled, prosecutors said.

Hilton, heiress to the Hilton Hotel fortune, first gained notoriety for her hard partying as a teen. She attracted worldwide attention when a sex tape she made with a boyfriend was released on the Internet.

She stars in the reality-TV series, "The Simple Life," now in its fifth season, with Nicole Richie. She appeared in the 2005 film, "House of Wax" and recently finished filming "The Hottie and the Nottie." She also is a handbag designer and has a namesake perfume.