A party championing the lowest castes appeared headed for a surprise win in elections in India's most populous state of Uttar Pradesh on Friday, while the country's ruling and main opposition parties both lost seats. 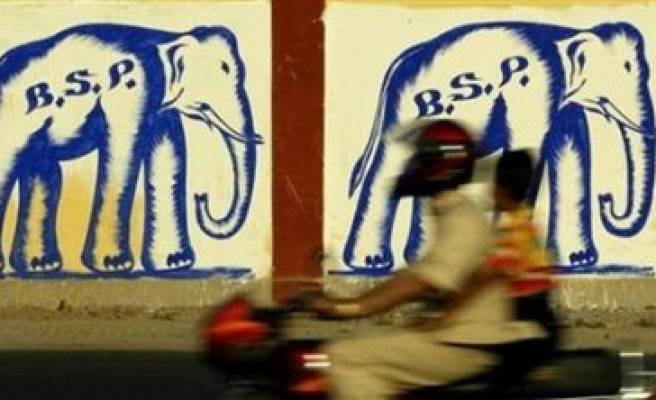 A party championing the lowest castes appeared headed for a surprise win in elections in India's most populous state of Uttar Pradesh on Friday, while the country's ruling and main opposition parties both lost seats.

The victory of the Bahujan Samaj Party (BSP), which represents India's former "untouchables," analysts said, could indicate that the state was moving away from divisive, caste-based politics and had voted for a new, broader coalition.

The BSP, headed by fiery teacher-turned-politician Mayawati, forged an unlikely alliance with the Brahmins, those on top of the Hindu caste hierarchy, touting it as a union of economically marginalized classes rather than just a caste-based relationship.

"This is a vote in favor of good governance. She has broadbased her support base to head a national social coalition. This is the winning card," said B.G. Verghese, a former editor and political analyst at New Delhi's Centre for Policy Research.

Home to about 170 million people, Uttar Pradesh in the northern Hindi heartland is one of the most crowded regions on earth. It is roughly the size of the United Kingdom yet only five nations, including India itself, have a higher population.

Although the month-long vote was fought largely on local issues, its outcome is expected to help shape the political direction for Congress and BJP ahead of 10 state elections due next year and national polls in 2009.

Pre-poll surveys and exit polls had forecast the BSP to emerge as the largest party in the 403-member assembly but it was not expected to win a majority on its own.

On Saturday, as counting of the electronic ballots neared a close, the party had won or was leading in a total of 210 seats.

"WRITING ON THE WALL"

Party activists and supporters burst firecrackers, beat drums, danced in the streets and distributed sweets across the state as the results arrived.

If the BSP wins a majority on its own, it would be the first to do so since polls in 1991. Three elections since then have given inconclusive verdicts, resulting in political instability, and corruption, with legislators frequently changing parties.

The BJP, which had won 88 seats in the previous poll and was forecast to touch about 110 this time, dropped to 50-55.

The party, which suffered a shock defeat in national polls in 2004 and struggled for direction before winning two small states this year, was hoping to gain seats in Uttar Pradesh and consolidate what some analysts said was a revival of fortunes.

"Had the BJP done as well as the surveys and the media had forecast, the results would have had an impact on the central government," said V.B. Singh, a political analyst at New Delhi's Centre for the Study of Developing Societies.

"But the BJP has lost support and people seem to have voted for a clearcut alternative," he said. "This appears significant and historic for the state."

Congress, which is in power at the centre but has lost out to state-based parties in what was once a stronghold, was down five seats to 20 despite a high profile campaign by Rahul Gandhi, heir apparent of India's most famous political family.

Congress and BJP had to learn and rise above narrow considerations and address development and governance, Verghese said. "If they don't read the writing on the wall and mend their ways they will be in trouble." Last Mod: 11 Mayıs 2007, 17:26
Add Comment