According to a little-noticed, highly classified Pentagon report released several days ago, controversial interrogation tactics used against terror suspects all carried out under the supervision of military psychologists. 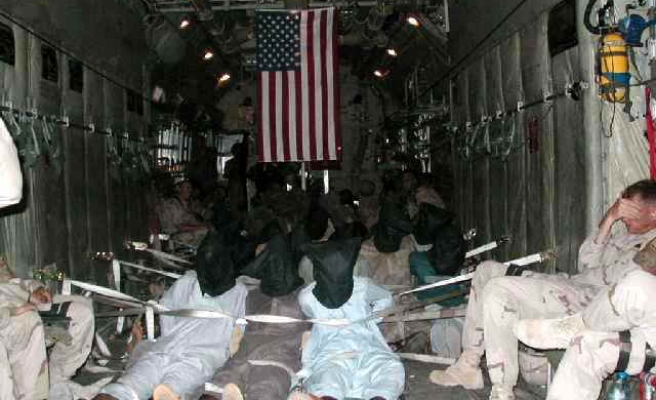 According to a little-noticed, highly classified Pentagon report released several days ago, controversial interrogation tactics used against terror suspects all carried out under the supervision of military psychologists.

Many of the controversial interrogation tactics used against terror suspects in Iraq, Afghanistan and Guantanamo were modeled on techniques the U.S. feared that the Communists themselves might use against captured American troops during the Cold War.

Originally developed as training for elite special forces at Fort Bragg under the "Survival, Evasion, Resistance and Escape" program, otherwise known as SERE, tactics such as sleep deprivation, isolation, sexual humiliation, nudity, exposure to extremes of cold and stress positions were part of a carefully monitored survival training program for personnel at risk of capture by Soviet or Chinese forces, all carried out under the supervision of military psychologists.

This troubling disclosure was made in the blandly titled report, "Review of DoD-Directed Investigations of Detainee Abuse", which for the first time sets forth the origins as well as new details of many of the abusive interrogation techniques that led to scandals at Abu Ghraib, Guantanamo and elsewhere — techniques that some critics contend the Pentagon still has not gone far enough in explicitly banning. Sen. Carl Levin, chairman of the Senate Armed Services Committee, called the findings "deeply troubling," and signaled his intention to hold hearings later this year on the interrogation methods it describes.

The report, completed last August but only declassified and made public on May 18, suggests that the abusive techniques stemmed from a much more formal process than the Defense Department has previously acknowledged. By 2002 the Pentagon was looking for an interrogation paradigm to use on what it had designated as "unlawful combatants" captured in the "war on terror." These individuals, many taken prisoner in Afghanistan, were initially brought to the U.S. detention facility at Guantanamo, although others were subsequently hidden away in CIA secret prisons or turned over to U.S.-allied governments known to practice torture. That same year, the commander of the detention facility at Guantanamo began using the abusive "counter resistance" techniques adopted from SERE on prisoners at the base, and according to the Pentagon report SERE military psychologists were on hand to help.

In response to fallout over the well-documented cases of prisoner abuse — which included prolonged isolation, sensory deprivation (visual and auditory), forced removal of clothing, exploiting prisoners phobias (notably fear of dogs), and threats against family members — the Pentagon began scaling back the use of SERE tactics in 2002 and eventually banned them altogether. The Army Field Manual, which serves as a primary guide for U.S. military interrogation, now specifically rules out the use of a variety of SERE-founded techniques including water-boarding, a form of simulated drowning, as well as the use of dogs.

But critics remain concerned that the Pentagon's clean-up has not gone far enough. In the letter to Secretary Gates, dated May 31, 2007, the non-profit Physicians for Human Rights cites an appendix of the current Army Field Manual that "explicitly permits what amounts to isolation, along with sleep and sensory deprivation." The letter, signed by retired Army General Stephen Xenakis, a psychiatrist and former senior medical commander, and Leonard Rubenstein, the organization's executive director, also points out that the current Field Manual remains "silent on a number of other SERE-based methods (including sensory overload and deprivation) creating ambiguity and doubt over their place in interrogation doctrine."

In 2006, the Pentagon issued revised guidelines reducing the role of psychiatrists as members of U.S. military interrogation teams, partly in response to critics who contend that doctors, who take an oath as caregivers, should not be involved in non-therapeutic or abusive treatment. But the Physicians for Human Rights letter says that even the Pentagon's new and revised guidelines continue to call on military psychologists to play a central part in interrogations, which the group calls "dangerous" and inappropriate. The Pentagon claims it has fully investigated all abuses and taken appropriate measures to prevent any kind of recurrence.

Even assuming that Pentagon reforms have succeeded in cleaning up the worst excesses of U.S. interrogations, a number of experts have grave doubts that current policies are either workable or effective. Members of the Intelligence Science Board, many of whom serve as consultants to the Pentagon, have recently argued that U.S. interrogation policy involves a grab-bag of outmoded techniques, many dating from the 1950s, that ignore lessons learned from law enforcement and lack cultural sensitivity to Arab and other foreign prisoners.