A Philippine passenger ferry capsized during a typhoon with more than 700 people on board, triggering a frantic search on Sunday for survivors. 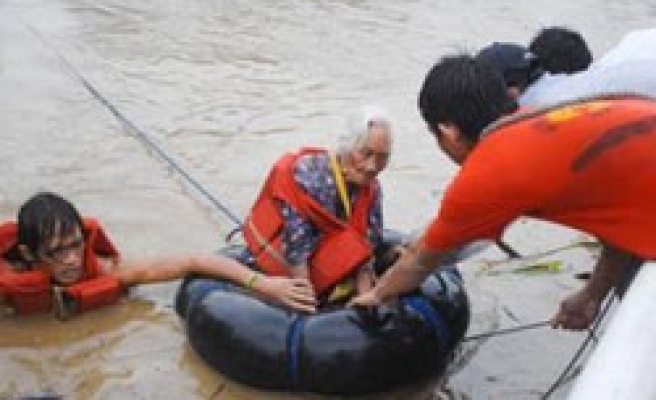 Most of the 626 passengers and 121 crew are missing and the vessel's owner, Sulpicio Lines, said it had lost contact with the ferry, which was en route to Cebu from Manila, at around 12.30 p.m. (0430 GMT) on Saturday.

The coast guard finally reached the area where the MV Princess of Stars sank 3 km (two miles) from Sibuyan island in the centre of the archipelago. It had been forced to abort a previous rescue mission on Saturday because of high seas.

Residents from a coastal village said only the ferry's bow was visible above the waves.

"Our ship is in the area but it has not reported yet," said Vice Admiral Wilfredo Tamayo, the head of the coastguard.

"We are sending people to get them but they have to walk to get there because the roads are impassable," she said.

At least four others aboard are known to have died.

Typhoon Fengshen, with maximum gusts of 195 kph (121 mph), has killed at least 85 people in central and southern Philippines, including 59 in Iloilo province, where floodwaters submerged whole communities.

After pelting Manila with torrential rain and winds on Sunday, Fengshen is expected to exit the northern part of the country by Monday en route to Taiwan, where it could make landfall in the next few days, according to storm tracker website www.tropicalstormrisk.com

In Romblon province, the bodies of two women and some childrens' slippers were washed ashore from the Princess of Stars.

Before dawn on Sunday, some villagers heard warning sirens from the ship, which had 626 passengers and 121 crew on board.

Dozens of relatives, some in tears, crowded into the offices of Sulpicio Lines in the central city of Cebu, looking for information.

"My father was one of the passengers. Right now there is no good news," said Lani Dakay. "My father is 59, I don't even know if he can swim."

Lieutenant-General Pedro Inserto, military commander in Visayas, the central region of the Philippines, said he was told the captain sounded the abandon-ship signal around 5 a.m. on Sunday.

"We were told the passengers and crew transferred to another ship. But we still do not know which ship," Inserto told Reuters.

In Iloilo, the local government feared the death toll from the typhoon could rise as tens of thousands of people remained marooned on the roofs of their submerged houses.

"Iloilo is like an ocean. This is the worst disaster we have had in our history," Governor Neil Tupaz told local radio.

In neighbouring Capiz, more than 2,000 houses were destroyed in the provincial capital and officials were struggling to make contact with communities further afield.

"The flooding is massive. Roads are impassable so we cannot penetrate the municipalities. Some areas are in waist-deep waters, only 10-wheeler trucks can be used," said Maria Barnes, the social welfare and development officer of the local government.

Fengshen tore up houses, trees and power lines and in the southern city of Cotabato, it sparked a "trash slide" at a rubbish dump, killing an 8-year-old girl and her grandfather.

More than 20,000 people were being housed in evacuation centres in the centre and south of the archipelago.

In Manila, large parts of the city were without power.

The international airport was relying on generators and passengers continued to cram into the departure terminal despite many flights being either delayed or cancelled.