Raymond Voegeli was backing out of a driveway when a Navy Blue Angel jet suddenly came ripping through a grove of pine trees and crashed, dousing his truck in flames and debris. 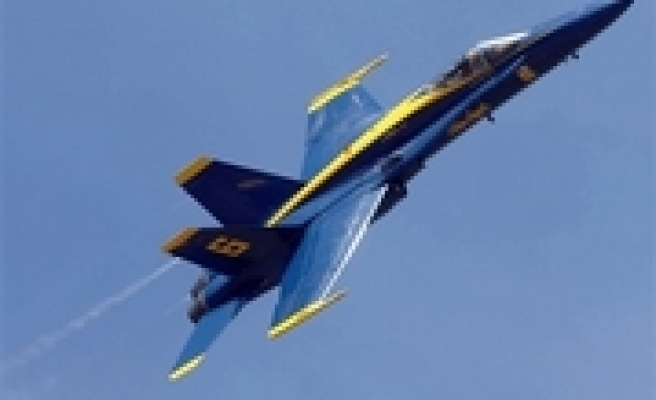 The jet went down Saturday during an air show, plunging into a neighborhood of small homes and trailers and killing the pilot. Witnesses said six Blue Angel jets were flying in formation at the Marine Corps Air Station when one crashed, sending up clouds of smoke.

"It was just a big fireball coming at me," said Voegeli, a 37-year-old plumber. "It was just taking pine trees and just clipping them."

Witnesses said metal and plastic wreckage — some of it on fire — hit homes in the neighborhood, located about 35 miles northwest of Hilton Head Island. William Winn, the county emergency management director, said several homes were damaged. Eight people on the ground were injured.

The crash took place in the final minutes of the air show, said Lt. Cmdr. Anthony Walley, a Blue Angel pilot. The pilots were doing a maneuver which involved all six planes joining from behind the crowd to form a Delta triangle, said Lt. Cmdr. Garrett D. Kasper, spokesman for the Blue Angels. One plane did not rejoin the formation.

Walley said the name of the pilot would not be released until relatives were notified of the death. A Navy statement said the pilot had been on the team for two years — and it was his first as a demonstration pilot.

"Our squadron and the entire U.S. Navy are grieving the loss of a great American, a great Naval officer and a great friend," Walley said.

Kasper said all possible causes of the crash are under investigation, and it could take at least three weeks for an official cause to be released.

John Sauls, who lives near the crash site, said the planes were banking back and forth before one disappeared, and a plume of smoke shot up.

"It's one of those surreal moments when you go, 'No, I didn't just see what I saw,'" Sauls said.

The Blue Angels fly F/A-18 Hornets at high speeds in close formations, and their pilots are considered the Navy's elite. They don't wear the traditional G-suits that most jet pilots use to avoid blacking out during maneuvers. The suits inflate around the lower body to keep blood in the brain, but which could cause a pilot to bump the control stick — a potentially deadly move when flying inches from other planes.

Instead, Blue Angels manage G-forces by tensing their abdominal muscles.

The last Blue Angel crash that killed a pilot took place in 1999, when a pilot and crewmate were killed while practicing for air shows with the five other Blue Angels jets at a base in Georgia.

Saturday's show was at the beginning of the team's flight season, and more than 100,000 people were expected to attend. The elite team, which is based at Pensacola Naval Air Station, recently celebrated its 60th anniversary.

Kasper said the team would return to Florida on Sunday afternoon.

"We will regroup," he said.