PM Erdogan did not name PKK but called the two explosions "the cost" of an intensified crackdown against militants in Turkey and neighbouring northern Iraq. 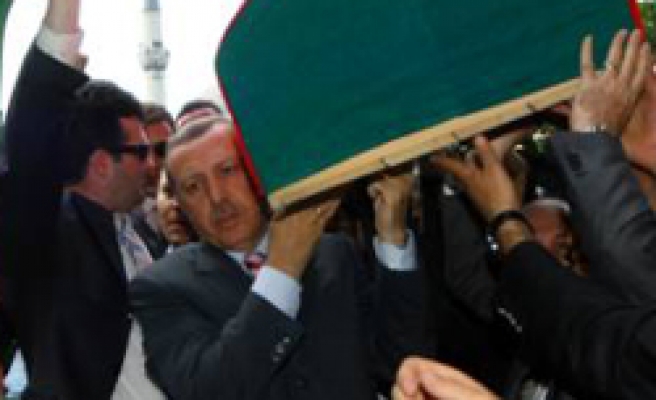 Turkish Prime Minister Recep Tayyip Erdogan on Monday joined thousands at the funerals of victims of two Istanbul bomb attacks which killed 17 people amid suspicions they were planted by PKK militants.

Erdogan did not name PKK but called the two explosions "the cost" of an intensified crackdown against militants in Turkey and neighbouring northern Iraq.

"Unfortunately, the cost of this (military action) is heavy. The incident last night was one such example," Erdogan said at the scene of the blasts as residents chanted "Down with the PKK."

But there was more condemnation of the group when Erdogan and other ministers joined thousands of people at the funerals of 10 of the victims at a local mosque.

The coffins and nearby buildings were covered in the national flag and the angry crowd shouted slogans against the PKK.

A loud blast on Sunday evening lured people onto a pedestrian street of a busy shopping and eating area in Gungoren, a stronghold of the ruling AK Party on the European side of Turkey's biggest city. Minutes later a second bigger bomb in a nearby trash can exploded, ripping through the crowd.

"This is the first incident I have ever seen in this neighbourhood. I have not come across fights and I have been living here for 20 years," said Arzu Bagdat, 33, textile trader.

No one has claimed responsibility for the bomb attacks, the deadliest in Turkey since 2003.

"This was such a trap for people. It's probably the PKK, who else would do such a professional job," asked Emin Ilkbahar, a shaken and visibly upset 39-year-old marble worker who had spent Sunday with a friend who died in the evening attacks.

Analysts said recent offensives against the militants, including the bombing of 12 suspected PKK targets in northern Iraq on Sunday, had cornered the PKK to take more actions to target civilians.

The Istanbul blasts came at the height of tensions in Turkey as the ruling AK Party fights for survival in court and police probe a shadowy ultra-nationalist group, called Ergenekon, suspected of potting a coup to overthrow the government.

But several residents of Gungoren said they doubted any links to the court case or Ergenekon.

The area was also not one frequented by tourists, who have been targets of past bombing campaigns.

"This hasn't got anything to do with the court case or Ergenekon. It is most likely a reaction to the military's attacks on the PKK," said Mustafa Ozyalcin, who scrapes a living by doing odd jobs in the neighbourhood.

"I hope and think members of the Constitutional Court will follow common sense for the sake of this country and not close down the AK Party now."

Locals residents -- many pious Muslims but also nationalists who migrated from the Black Sea over the years to search for a better future -- put up Turkish flags overnight and applauded Prime Minister Tayyip Erdogan when he visited on Monday.

"We made this street a prestigious street for the neighbourhood. We wanted the people to get a nice area and be able to walk around," Muharrem Ergun, an AK Party and local municipality member, told Reuters.

"Those who died were mainly working class people."