Barzani's remarks came in an interview with Italian daily Il Tempo during his visit to Rome, Pukmedia, affiliated with Iraqi President Jalal Talabani's Patriotic Union of Kurdistan (PUK), said in its report. 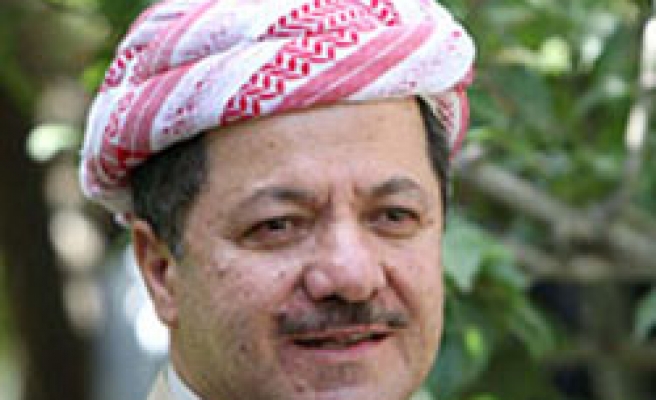 Iraqi Kurdish leader Massoud Barzani has reportedly suggested that the outlawed Kurdistan Workers' Party (PKK) is not a terrorist organization, despite it being recognized as such by a large majority of the international community.

Barzani's remarks came in an interview with Italian daily Il Tempo during his visit to Rome, Pukmedia, affiliated with Iraqi President Jalal Talabani's Patriotic Union of Kurdistan (PUK), said in its report, which was posted late on Sunday. However, there was no report on the Peyamner Web site, which is affiliated with Barzani's Kurdistan Democratic Party (KDP), concerning the interview.

In response to a question concerning bilateral cooperation between Turkey and Iran targeting the PKK, Barzani, the leader of the largely autonomous Kurdish region in northern Iraq, explained that he has no evidence to prove such cooperation, though he reaffirmed that there has been cooperation between the intelligence agencies of both countries, Pukmedia said.

"Kurdish people should not strive with weapons; but rather they should choose a political option. PKK is not a terrorist organization -- if PKK rejects Turkey's commitment to hold talks with it, PKK can be then considered as terrorist. With respect to security situation, Kurdistan region has taken considerable steps. We should be united because extremism and terrorism do not have a geographical border. Accordingly, an international force for cooperation is required," Barzani was quoted as adding.

"We are not afraid of anyone. Invading our soil (Kurdistan region) is a step, just like gambling, which will be followed by crisis to the whole region," Barzani was also quoted as saying in response to a question about whether his region was afraid of being invaded by Turkey under the pretext of an attack on the PKK.

Iraqi and Turkish officials have recently been holding regular talks described by Ankara as part of an "ongoing normalization" of bilateral relations between the neighboring countries.

All of these meetings in Iraq took place following a key visit to Ankara by Iraqi President Jalal Talabani in March. The Iraqi president's visit had come only one week after the Turkish military withdrew troops from northern Iraq following an eight-day ground offensive against the PKK. Washington, which provided intelligence assistance to Turkey during the offensive, has urged the Turkish capital to have direct talks with the regional Kurdish administration in northern Iraq, led by Barzani, who has angered Ankara in the past by defying Turkish calls to recognize the PKK as a terrorist organization and prove that he is not supporting the organization by taking visible steps to show otherwise.

"Kirkuk is definitely a part of Kurdistan; but the identity of Kirkuk should be first identified through respecting those nations living there. We do not intend to jeopardize the security and stability of Iraq. Therefore, decision should be made based on the referendum," Barzani also told the Italian daily, Pukmedia said.