Terrorist attacks from the Kurdistan Workers' Party (PKK) have escalated with the arrival of summer; 33 security officials were killed by the PKK in May, another 14 this month so far. 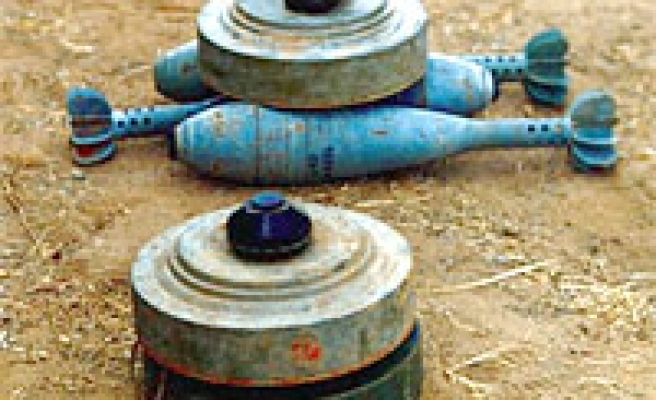 Terrorist attacks from the Kurdistan Workers' Party (PKK) have escalated with the arrival of summer; 33 security officials were killed by the PKK in May, another 14 this month so far.

Most of the attacks were conducted using remote-controlled land mines, with the PKK preferring to use landmines and bombs rather than engage in armed conflict. After the confiscation of PKK munitions, the Gendarmerie General Command examined their country of origin. It was found out that 60.6 percent of the 16,131 land mines seized were made in Italy.

Large quantities of weapons and ammunition have been transferred from Iraq to Turkey, particularly following the US occupation in Iraq. Contrary to expectations, these weapons are generally not from the US. Only 162 of the weapons, mostly heavy weaponry and hand grenades, seized by the security officials during the last two years were of US-origin. Most PKK weapons are manufactured in Russia and Italy. In 1999 PKK leader Abdullah Öcalan had to leave Syria and sought asylum in Italy.

According to the findings of the Gendarmerie General Command between 2005 and 2006 the PKK acquired most of its weapons from Russia and countries in the Commonwealth of Independent States (CIS). Founded as a Marxist-Leninist organization, the PKK could easily procure weapons from the Soviet Union in its early years. The lack of state authority that followed the collapse of the Soviet Union also benefited the terrorist organization. Although Russia and the CIS still serve as the traditional source of weapons supply for the PKK, the share of European-made weapons in the PKK's stock has apparently increased. Thirty-nine percent (6,413) of the weapons seized by the Turkish security forces were made in Russia but 32 percent (5,299) were made in Italy. Italian-made weapons consist mostly of land mines, implying a strategy change by the terrorist organization to remote-controlled land mines from armed conflict. The country of origin of the A4 explosive used by the PKK is Portugal.

The PKK does not procure weaponry directly from Portugal, but purchases Portuguese products via Third World countries. Reportedly the PKK’s political branch in Europe provides these connections. Almost all C4 explosives used by the PKK have been procured from European countries. The PKK takes care in not establishing direct connections with these countries while closely monitoring the deals these countries make with African and Asian countries.

The PKK had largely abandoned its terrorist acts following the 1999 apprehension of Öcalan, but it changed its strategy following the US occupation of Iraq. The terrorist organization is now refraining from engaging in armed conflicts with Turkish security forces, but prefers to conduct bombings using remotely operated land mines or explosives.

In the last six months, the PKK has conducted more than 30 such attacks. In May and June, 29 land mines laid by the PKK were rendered ineffective while 105 kilograms of C4 explosives and 125 other various explosives were seized. A4 explosives seized in the operations conducted in Muğla, Van, İzmir, Ağrı and Şırnak were manufactured in Portugal. It is reported that the A4 explosives manufactured in Portugal are first sold to Third World countries, particularly to Iraq, and then supplied to the PKK.