George W. Bush's visit to Europe this week has focused on the countries that once fell under the veil of communism. 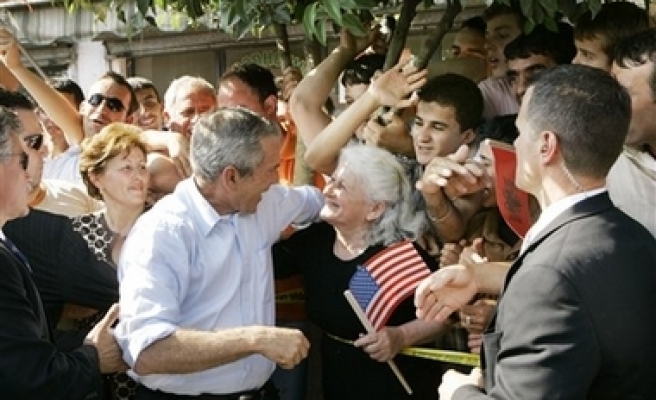 George W. Bush's visit to Europe this week has focused on the countries that once fell under the veil of communism and that have also, not coincidentally, proved important allies in the wars in Afghanistan and Iraq. Bush's brief visit to Poland on Friday was his third as President.

But nowhere will Bush receive as warm a welcome as in Albania, where he is scheduled to land on Sunday morning. Bush will be the first sitting President to visit the remote Balkan country, the poorest in Europe, and Albanians have outdone themselves in preparations: tens of thousands have thronged to the run down capital, Tirana, to get a glimpse of the American first couple. The parliament recently passed a bill authorizing the U.S. to do anything necessary, "including the use of force," to secure the President. One headline declared: "Please Occupy Us!"

In addition to sending small numbers of non-combat personnel to Iraq, Albania voted with the U.S. in the United Nations on key provisions, such as the refusal to recognize the jurisdiction of the International Criminal Court, and also offered to take care of prisoners released from Guantanamo who the U.S. refuses to harbor and cannot be returned to their home countries for fear of persecution. Albania is the only country in the world to provide such refuge, and, coincidentally, lawyers acting for detainees announced last week that 30 more are headed from Guantanamo to Albania in the near future. (Human Rights Lawyers have denounced the move as a failure to properly address the rights of detainees.)

While Bush can be sure of a rapturous welcome in Tirana, the same is no longer true of all post-communist European countries, including some others on his current itinerary. In the Czech Republic, more than 60% of citizens are against his missile defense initiative, not because they agree with Moscow (which has also, loudly, opposed the plan) but because they fear being dragged into another super power slug fest. Surprisingly, Czechs view Vladimir Putin, the Russian President, more highly than they do Bush, although polls show they still would prefer the U.S. as a neighbor.

In Poland, former Defense Minister Radek Sikorski, once a strong supporter of close ties with America, recently denounced the missile defense initiative, writing, "If the Bush administration expects Poles and Czechs to jump for joy and agree to whatever is proposed, it's going to face a mighty crash with reality. The administration might have gotten away with this five years ago, when the memory of Ronald Reagan's steadfast support for our freedom fighters had just been bolstered by American advocacy of NATO enlarge... But the war in Iraq has dented Central European trust." Many Poles are also upset at this week's apparent confirmation, in a report by Council of Europe investigator Dick Marty, that the the CIA used a base in Poland to hold high value terror suspects between 2002 and 2005 as part of a secret operation known as extraordinary rendition. The Polish government rejects the finding.

Many ordinary eastern Europeans have begun to chafe at the apparent lack of return on their investments of troops and resources in U.S.-led, far off wars. And the failure of the U.S. to grant visa-free travel to eastern Europeans—their fellow E.U.-members in France and Germany can enter American borders freely—is another sore point. Bush has used his eastern European visits to trumpet a "freedom agenda," asserting that, with their recent experiences under communist tyranny, eastern Europeans share his goal of spreading democracy around the world. But for now, the Albanians are the only ones supporting it in the streets.