Erdogan said Turkey had been going through a major change in the past 5 and a half years and pointed out that they took important steps for democracy. 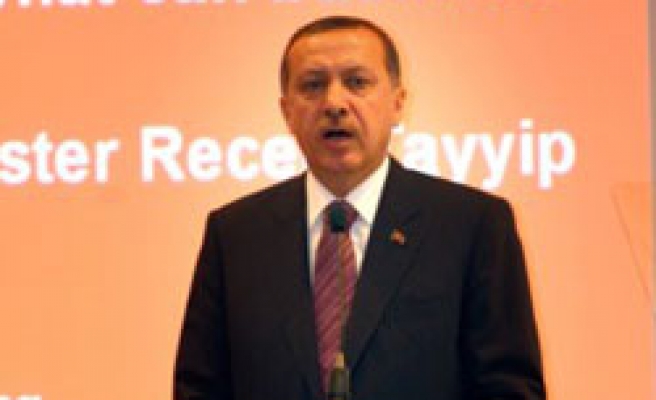 The 16th of the Business Roundtable meetings with Turkey's government organised by "Economist Conferences" --a branch of the Economist-- was held Wednesday in Istanbul.

The Economist magazine, regards the meeting as the latest in long-standing series of high-level, straight-talking sessions with Turkey's leaders.

The meeting titled "The Future of Economy and Business" aims at discussing issues like economic reforms in Turkey, measures to strengthen the economy, and spread prosperity throughout the country, Turkey's progress in the path to EU membership, Turkey's plans for becoming an energy gateway for Europe, and future timetable for further privatisation.

Turkey's PM Recep Tayyip Erdogan who delivered a speech at the meeting addressed some of these issues and made assessments on the government's economic and political reforms in the past five years in office as well as informing the audience on their future projects and goals.

Erdogan said Turkey had been going through a major change in the past 5 and a half years and pointed out that they took important steps for democracy. He said the most important of these steps was implementing Copenhagen criteria, and starting accession negotiations with the EU.

He said they also implemented important economic reforms, "undared by past governments for decades."

Erdogan noted that their determinism along with said reforms made Turkey the 17th largest economy in the globe and 6th largest in Europe.

Erdogan regarded the private sector as the driving force of Turkey's economy and said the government withdrew from the commercial arena for the most part, during their term in office. He said they successfully implemented free market economy in telecommunications, tobacco, energy, civil aviation sectors and referred to privatisation in these sectors.

He said Turkey which ranked 7th in iron and steel production and 2nd in glass production globally, produced one million motor vehicles every year.

Thanks to the reform programmes, Erdogan said, they managed to establish sustainable development, build economic balance and fiscal discipline and bring stability to capital, and foreign exchange markets.

Erdogan said Turkey's economy grew by an average of 6.7 percent per year and expressed their government's determinism to carry on structural reforms. He referred to new arrangements and laws they introduced in Banking and Finance markets and said Turkey's finance sector rested on stronger grounds, when compared with the past.

He said they also took measures to spread the economic growth and welfare through out Turkey. He named one of these measures as the implementation of regional incentive loans.

He said regional development projects also served this goal and noted they started implementing these projects in East Anatolia, Southeast Anatolia, and in central province of Konya.

Erdogan referred to the South East Anatolia Project and said it aimed at creating 3.5 million jobs, providing irrigation over 4.5 billion acres of land and producing 27 billion kv/hr every year.